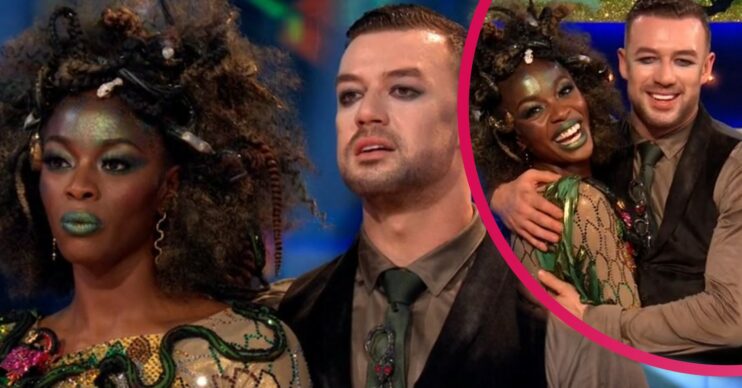 The pair have sparked romance rumours

Strictly Come Dancing stars AJ Odudu and Kai Widdrington have been at the centre of romance rumours for a few weeks now.

During last night’s show (October 30), AJ‘s nephew asked Kai and AJ to kiss as they visited her in rehearsals.

Following their performance, host Claudia Winkleman asked Kai and AJ: “I would like to say on behalf of your nephew, who we all fell in love with, if you wanted to kiss at any point.. now come on, Kai. Kai, it’s the right time.”

Kai replied: “I know it is… After the scores.”

Claudia joked: “Goodness me, you tease.”

After their scores, Kai sweetly kissed AJ on the hand.

However, according to body language expert Judi James, Kai seems to be “adopting a professional stance” while AJ is “much more up for some openness”.

Speaking to Metro, Ms James said: “With Claudia though, AJ looked teasingly open to going public, turning to wrap her arms around Kai and use eye contact to suggest she might be up for an off-dancefloor repeat of their choreographed near-kiss of the week before.

“He cheated horribly, pressing his lips on the back of AJ’s hand rather than her cheek or even lips.

“The good news for this couple though is that their dances are so sublime that no-one could accuse them of manufacturing a faux-mance to gain extra votes.”

Fans of Strictly have loved seeing AJ and Kai’s chemistry on the dance floor over the last few weeks.

So much so, they’re hoping the couple will end up in a relationship away from the programme.

One person said on Twitter: “Aww I so hope [romance rumours] is true, AJ/Kai would make a good couple.”

Another wrote: “I hope the rumours about AJ & Kai are true. They make cute couple.”

A third added: “Such a seemless couple! Their connection is amazing.”