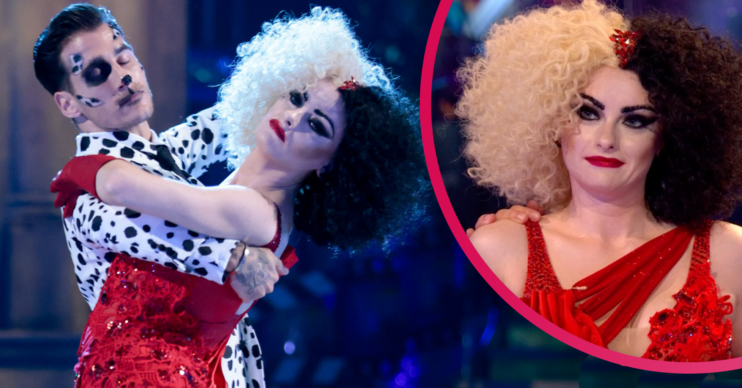 The stars addressed their 'friendship' after the show

Strictly star Katie McGlynn has been accused of throwing “shade” at Gorka Marquez after they were eliminated in Sunday night’s results show (October 10).

Katie and Gorka were up against Judi and Graziano in the dance off, with the former Coronation Street star leaving the show.

The couple’s partnership has been under scrutiny during the dance show, with some claiming it was obvious they didn’t get on.

And those same people are now accusing Katie of throwing “shade” at Gorka during her exit speech.

What did Katie say on the Strictly results show?

Turning to Gorka, Katie said: “Thanks so much for teaching me in your funny ways.

Strictly fans immediately picked up on Katie’s phrasing in the speech.

One said: “And that sums up really why you were two weeks in the bottom two. ‘His funny ways’ could mean anything.”

Another exclaimed: ‘Funny ways’?! What even is that!”

“Shade, I think!” declared another.

Others said they weren’t surprised Katie and Gorka had gone.

“Something a bit ‘off’ with Katie and Gorka. Not surprised they’ve gone,” they said.

“So glad Katie and Gorka are out,” stated another. “You can tell from a mile off they both literally can’t stand each other and she doesn’t want to be there!”

However, if you go straight to the horse’s mouth, both Katie and Gorka seemed delighted to have been paired up.

After leaving the show, they both posted gushing messages of thanks to each other on social media.

What did Gorka say to Katie?

Gorka said: “THANK YOU!!! @katiexmcglynn thank you for the past 4 weeks. From day 1 I knew we were gonna get on and have fun!

“You didn’t have the easiest ride but always came with a smile and giving 100% to everything I asked you to do in the rehearsals room.

Read more: Gorka Marquez addresses claims he and Katie McGlynn ‘don’t get on’

“You always trusted me and believed in my work and for that, I thank you.

“Thanks for all the laughs and funny memories we shared over the last few weeks. If there was something we did all the time it was that…laughing.

“Today is the end of our dance journey but not our friendship one (sorry you won’t be able to get rid of me and Mia is still asking for you!).

What did Strictly star Katie say to Gorka?

Posting on Instagram, Katie said her time on the show had been “utterly magical”.

She added: “I’ve loved every second of rehearsals with @gorka_marquez and performing each week.”

However, Katie continued: “To be part of such an iconic entertainment show has been an absolute blast, but I think it’s time for me to get back to what I do best and love the most… acting!”

She concluded: “And despite what you may have read, I couldn’t have asked for a better partner and I’ve had such a brilliant time with Gorks… I’ve made friends for life working on this show.”

Head to our Facebook page @EntertainmentDailyFix and tell us if you thought the right pair went home.