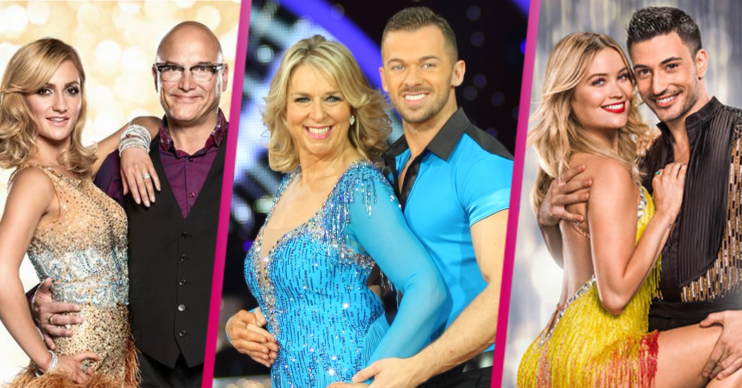 Strictly on BBC One: ‘Bullying’ rumours, tears and the couples who REALLY didn’t get on

Eyes peeled for the first spats 2021

BBC dance show Strictly Come Dancing relies on strong partnerships between the signed up celebrity and their paired professional partner.

But what happens when the two don’t see eye to eye?

Inevitably egos will be bruised when celebrities are under order from their pros.

But you take it, right, to put on the best possible performance on a Saturday night?

Well… that hasn’t proved strictly true in some cases.

Read on for the biggest celebrity/partner spats in Strictly’s history.

Why do arguments happen on Strictly?

We’ve all been there.

Now add eight hours on your feet dancing and you can see how arguments arise.

And you always tend to take it out on the person you are closest to or spend the most time with – in other words, your partner.

Former This Morning host Fern took part in Strictly in 2012 and, in 2015, she made some shocking claims about her pro partner.

Fern claimed Artem used to “kick” and “shove” her during rehearsals.

“He would look at my feet and just kick me or shove me,” she said of times they were in hold and she got her footwork wrong.

She added to The Times: “He was like: ‘Shut your face. Go home before I kill you.'”

“I would say: ‘Oh please just kill me, it would be easier.’ Or what was his other one? ‘If you go for a cup of tea now, I will blow off like an atomic bomb.’ I thought, well I won’t correct him on that one.”

Artem insisted he treated Fern with “respect and genuine care” and said her comments didn’t reflect “any situation” he recognised.

Brendan Cole and, errr, a lot of his Strictly partners

Good old Brendan was never one to shy away from revealing his true feelings.

And a handful of his celebrity partners felt his wrath more than most.

Series 3 saw Brendan paired with Fiona Phillips – and they didn’t exactly hit it off.

In fact, some 10 years later when Brendan was axed from Strictly, Fiona said it was “karma”.

“Brendan was a real bugger, actually. He wasn’t very nice. He was really naughty.,” she said.

“He’s not on the show now. Karma indeed. It works its way every time.”

Fast-forward to 2016 and Brendan was dancing with singer Anastacia.

And it’s fair to say there’s no love lost between the pair.

“We’ve definitely had some conversations, I won’t lie about that. I think we’re both two very strong-minded individuals in a process, but we get along very, very well,” the singer said at the time.

However, in 2018 she revealed she was in touch with “pretty much everyone” from Strictly.

“We don’t have that kind of connection. It was just for the show,” she said.

Lulu was another star paired with Brendan – and it’s safe to say they’re no longer pals.

He said she was “not a particularly nice person” when they worked together, and has since branded her his worst ever partner.

“Blooming awful,” he said. “But she felt the same about me, so it’s alright.”

Gregg Wallace appeared to blame his early exit on his pro partner.

What is it they say about a bad workman blaming his tools, Gregg?

“I love dancing, but if I were paired with somebody who liked me then I would have done better,” he commented.

Adding fuel to the fire, after their exit Aliona retweeted a number of messages calling for her to get a “decent partner” in the next series.

The Love Island host took part in 2016 and claimed: “I cried every day. And I really was broken, both mentally and physically, by the end.”

She added: “To the outside world I tried to suck it up and smile, and I did that to the best of my ability, but it affected me deeply.

“My friends and family knew that I was struggling. And they were there for me. The media, however, saw me as blonde bait in a sequinned dress.”

Laura also admitted: “I was placed with a dance partner I was extremely uncomfortable with.”

Of course, Gio was coupled up in real life with Georgia May Foote, a friend of Laura’s.

However, they went their separate ways ahead of the series, and Laura was the “rumoured love interest”.

Alexandra Burke had counselling after Strictly

Alex was paired with Gorka Marquez during her time on the show and the singer was hit with rumours of diva behaviour behind the scenes.

Gorka denied it, Alex denied it, but still they persisted – and at the time Alex’s mum was dying in hospital.

Read more: Strictly controversy as Tom and Amy remain in the contest despite testing positive for COVID

“To this day, I still don’t understand where the stories came from because they were absolutely lies,” Alex said.

“I loved my time on the Strictly dancefloor but I’ve had to put the rest of that period behind me and I’ve had to have therapy to do that.”

Will Young quits after row with Len

Pop Idol winner Will Young was paired with Karen Hauer when he quit midway through the run in 2016.

It came after judge Len Goodman told him to “turn up, keep up and shut up” in a row over a routine.

“I haven’t really been in touch with Will since the show,” she said the following year.

However, a source told The Mirror at the time that Will left in part due to backstage “squabbles” with Karen.

“Karen was just doing her job, she was training him hard but in the end he just didn’t want to keep getting told off and corrected all the time,” the insider said.

“It infuriated him. They squabbled a few times during rehearsals and it left him feeling exhausted.”

More backstage squabbles are said to have occurred between Amy Dowden and Danny John-Jules.

Things got off to a flying start, with the judges marking them highly.

However, away from the dance floor rumours swirled – especially after they admitted on It Takes Two that an argument had taken place.

“Bullying” claims were thrown about – something Danny strenuously denied. And, when he left the show, he refused to appear with Amy on the spin-off show.

Instead, he accused Strictly of “creating stories” about him, which the BBC insists wasn’t the case.

Strictly Come Dancing is on Saturday (October 2) at 6.45pm on BBC One.