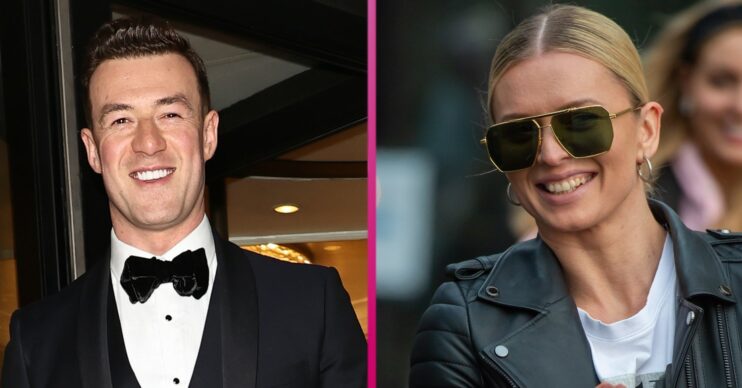 Rumours about Kai and Nadiya’s romance have been abound since January when it was revealed that Nadiya had split from her fiancé.

Are Nadiya and Kai together?

Long-rumoured Strictly couple, Nadiya, 33, and Kai, 26, seem to have finally gone public with their romance.

The pro dancers reportedly held hands as they strolled around Belfast airport on Sunday (April 3).

In pictures obtained by the MailOnline, Kai and Nadiya can be seen holding hands as they head through the airport.

A source told the publication: “They looked like any normal couple breezing through arrivals holding hands.

“They were wearing sunglasses but didn’t seem to mind that people clearly recognised them from Strictly,” they continued.

“Nadiya was giggling and the two of them looked totally loved up.”

ED! has contacted reps for Nadiya and Kai for comment.

The latest update in Kai and Nadiya’s romance comes just weeks after the pair were reportedly spotted kissing at a charity event in Leeds.

The duo, along with BBC Breakfast star Dan Walker, were in Leeds to perform at a charity ball.

It was at this event that the couple apparently cosied up to each other.

A source speaking to The Sun said: “Nadiya and Kai appeared to be very much an item and their chemistry was palpable during the rehearsals — even when they weren’t dancing.

“There were quiet moments when they hugged and shared a quick kiss,” they continued. “Nadiya and Kai seem very happy together. It is all very sweet.”

Rumours of a romance between Nadiya and Kai began earlier this year.

During rehearsals for the Strictly tour, Nadiya apparently had split from her fiancé. Nadiya and her ex share a daughter together.

It was widely reported that Kai had supported Nadiya throughout her split. Reports later claimed that a romance had sparked up between the two pro dancers.

The rumours of a romance were seemingly confirmed at the end of January when the couple were reportedly spotted sharing a kiss.

Photos obtained by The Sun showed the pair locking lips in a bar in Newcastle during a break in the tour.

“They didn’t seem to care who could see them,” an insider told the publication at the time.