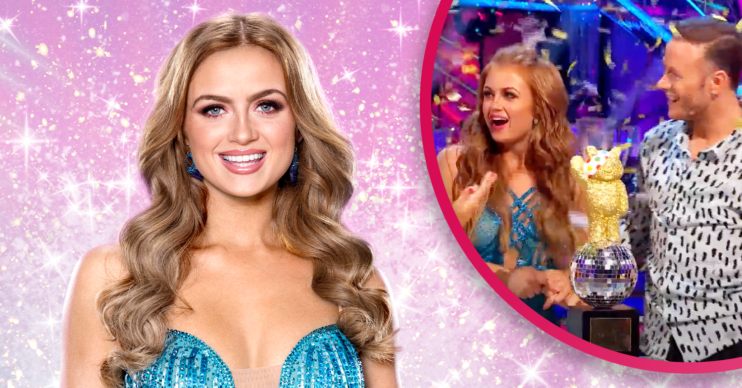 She lifted the glitterball trophy with Kevin Clifton

Strictly 2020 star Maisie Smith has defended her place on this year show.

The comments come after EastEnders star Maisie was named winner of the Children In Need Strictly special last year.

She was partnered with Kevin Clifton, who has since stepped down as a pro on the show.

Speaking to Entertainment Daily and other news outlets, Maisie admitted the special “helped me in a way”.

Hitting back at claims she has an unfair advantage over the rest of this year’s hopefuls, Maisie said: “I mean, five days, back in September, I don’t think that’s prepared me for what’s about to come.”

However, she added: “It helped me in a way. I understood how much hard work you have to put in and how many hours, but I’m still not ready.”

What she has been doing, though, is hitting the gym “every single day” since they opened back up in preparation for the show.

Last week she showed off the results of her hard work with a selfie showing off her biceps and toned abs.

Maisie said: “I’ll be honest, I love going to the gym. The gym is my happy place, it’s where I can work on myself.

“In lockdown that was closed and I didn’t do one home workout. I couldn’t be bothered, I was tired. But as soon as the gyms opened back up, I knew I was doing Strictly.

“I’ve literally gone every single day since they opened back up just to prepare myself because I know how hard this is going to be and I want to be fit enough to be prepared for it.”

A post shared by Maisie Louise Collender Smith (@maisiesmithofficial) on Oct 8, 2020 at 10:36am PDT

So which style of dance does Maisie think she’ll be most suited to on Strictly?

The one she won the Children In Need show with, the cha-cha, she revealed.

“I really enjoyed that because I’ve got hips for days. I was really in my comfort zone there so if there was one dance that I’m looking forward to it’s that one.”

Maisie admitted she isn’t looking forward to ballroom numbers, though, as she touched on her dance background more.

“I’ve never been good with form. I used to do ballet and I absolutely hated it because everything had to be so perfect and I just wanted to dance and shake my hips.

“So anything that contains a lot of wiggles, something I can grove to, I’ll be good at that,” she said.

Advice from her EastEnders co-stars

Maisie comes from a long line of EastEnders stars competing for the coveted glitterball.

However, none have brought it home since Kara Tointon in 2010.

Could Maisie be the one to return the trophy to Albert Square?

So have any of her castmates offered any Strictly advice?

I mean, five days, back in September, I don’t think that’s prepared me for what’s about to come.

“Everyone I’ve spoken to, they’re so excited,” she revealed.

“They’ve all said it’s the most amazing experience and to have fun and be yourself, which I need to keep remembering.”

Maisie added: “It’s going to be intense and everyone I’ve spoken to, my co-stars, they’ve all said it was the most amazing thing but it really took it out of them.

“They said be prepared for the long days. I’m looking forward to it. It’ll be something different. In lockdown I wasn’t doing anything so it’s a nice change,” she said.

The bit she’s most excited about though, being Strictly-fied.

“I’m here for it all, the more the merrier. This is the bit I’m most excited about.

“Obviously at work, my character’s look is pretty much the same and it has been for the past two years. So it’ll be exciting to now get to look glamorous every single weekend.

“And obviously because of lockdown I haven’t looked good since February so now I can look good all the time,” she laughed.

How she’ll deal with criticism

Clearly wise beyond her years, Maisie also opened up on how she’ll deal with the judges’ criticism.

“I can take it on the chin, I’ll smile through the tears,” she said.

“As long as it’s constructive criticism, I’ll always take that where I can get it.”

It seems like the EastEnders star’s harshest critic, though, will be herself.

All she’s looking for is “someone who can have a laugh with me an obviously still get the work done”.

Head to our Facebook page @EntertainmentDailyFix and let us know if you’re looking forward to seeing Maisie Smith on Strictly.