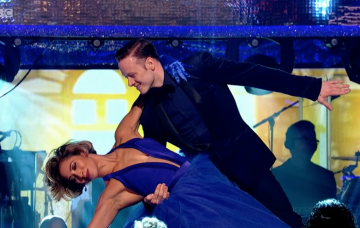 Strictly Come Dancing viewers were moved to tears as ex-couple Karen and Kevin Clifton shared a beautiful dance to open the live shows.

It comes as Karen revealed she has had therapy to cope with their marriage breakdown.

The ballroom stars performed on an elevated platform during the Strictly professionals’ curtain-raising group dance.

Their fellow cast members danced along with them in the BBC studio to Elton John’s Your Song.

Speaking about their relationship separation, Karen told the Mail on Sunday: “I’ve taken a big hit.

“I had to realise that I’m 36 years old. I’m not a kid and it has taken me a lot of therapy and life coaching to get through this. I have found it really difficult.”

She added: “We thought our relationship was going to be the best thing. It turns out that it wasn’t.”

The newspaper reported that Karen is having therapy sessions twice a month, as well as hypnotherapy for anxiety.

The couple tied the knot in July 2015 but confirmed six months ago that their marriage was over.

They say their huge workloads had a big impact on their relationship but that they hope to remain as professional partners.

Viewers were thrilled to see Karen and Kevin back dancing together on last night’s show.

One tweeted: “Kevin and Karen dancing to that beautiful song made me quite teary and emotional.”

Another wrote: “Awww what a beautiful pro dance and great to see Karen and Kevin partnered up.”

A third added: “Good to see Karen and Kevin dancing together despite all the bad blood.”

seeing kevin and karen dance together after all the crap they’ve been through was my favourite part of the show tonight. the strongest people i know❤️ #strictly

How did you rate Strictly Come Dancing’s first live show? Leave us a comment on our Facebook page @EntertainmentDailyFix and let us know what you think!