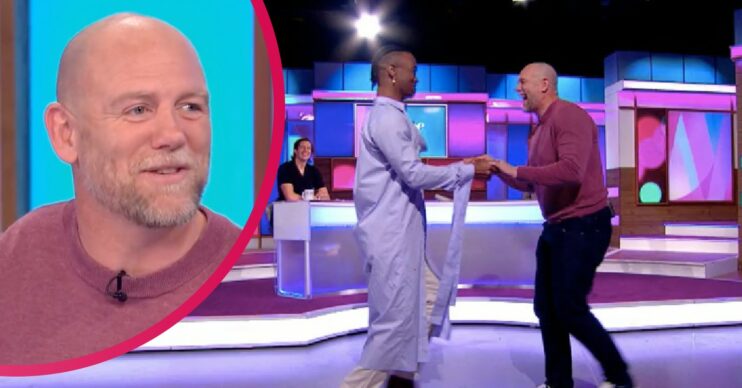 The former rugby star  and Johannes were part of an all-male panel today to mark Mental Health Awareness Week today.

The all-female cast was replaced by an all-male one too as ITV marked Mental Health Awareness Week.

Mike was joined by Vernon Kay, Johannes Radebe, and radio DJ Roman Kemp on the panel.

During the show, a variety of topics were discussed, including mental health and infertility fears.

The subject of body confidence and how social media plays a part in it was also discussed.

However, there was also some levity in today’s show, in particular when Mike and Johannes did some dancing together.

At one point during today’s show, the Loose Men discussed whether competitiveness in school’s sports day is a good thing.

Mike argued that all types of sports, including rugby and dance, are good for children.

“Nothing should be off the table, expose your kids to as much as they can get their hands on,” he said.

“I look at dancing now and posture – kids really struggle with at the moment – dancing’s amazing for posture so it’s an amazing way of getting them to stand properly, to sit properly, have control of shoulders,” he continued.

He then went on to reveal that he and his wife, Zara Tindall, want to learn how to dance.

“Dancing makes you feel good, so that’s why I love it. I love music, but we’ve always talked about doing dance lessons… just to do it as a social thing, but we’ve never got round to it,” he said.

Speaking about Mike and Zara learning to dance together, Johannes said: “It’s going to be the most beautiful thing… that’s going to bring you closer together.

“You’re going to come and teach us,” Mike said to Johannes. “I definitely will… I encourage you to go for gold, take up dancing,” Johannes responded.

At the end of the show, Johannes then did good on his word and taught Mike a bit of dancing. As they finished, the duo hugged each other.

“There we go! I know someone on the inside of Strictly, maybe we can get him on,” Vernon joked as he and Roman applauded.

One viewer was of a similar mindset too. “HRH Tindall should do Strictly,” they said.

“Go on Tinds,” another said, as they watched him dance.

Loose Men is available to watch on ITV Hub now. Loose Women returns tomorrow (Friday, May 13) at 12.30pm on ITV and ITV Hub.

Did you enjoy seeing Strictly fave Johannes Radebe on Loose Men? Leave us a comment on our Facebook page @EntertainmentDailyFix and let us know!