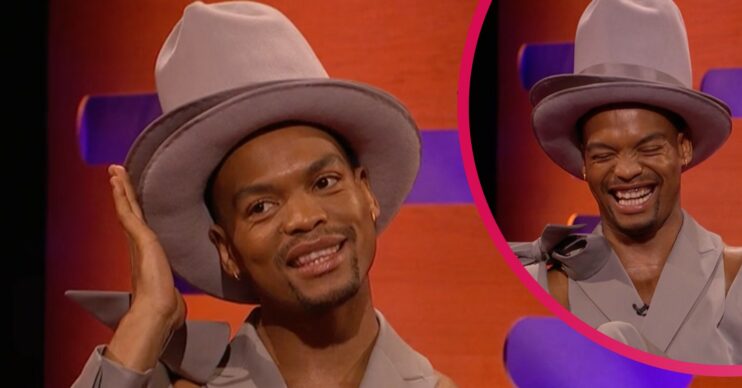 How many hats is too many hats?

Strictly star Johannes Radebe ensured he was the centre of attention during his appearance on last night’s The Graham Norton Show.

And many viewers posed the same question on Twitter: ‘Why is Johannes wearing two hats?’

Strictly star Johannes Radebe and the mystery of his two hats

Early on during Friday (February 18) night’s episode, host Graham Norton said he wanted to “address the elephant in the room”.

Turning to Johannes, he asked: “Do you know you have two hats on?”

“I do,” Johannes laughed in response.

To which Graham replied: “They’re both lovely!”

However, fans watching at home expressed on Twitter they wanted to know more.

And unfortunately, some were so baffled they shared posts including unnecessary abuse as they sought to understand Johannes’ style choice.

Strangely, however, it wasn’t questioned why he’d be wearing a hat at all while indoors.

“Why is Johannes wearing two hats? Is this fashion now?” one person wrote.

Why is Johannes wearing two hats? Is this fashion now?

They went on to joke: “Has he been watching too much cricket? #GrahamNortonShow.”

One person who wasn’t convinced pondered Johannes’ hat approach: “Just watching Graham Norton and there is a guy on it wearing two hats. And it’s not for comic effect. Suddenly I feel every one of my 71 years.”

However, another person lashed out: “Why is Johannes wearing two hats on Graham Norton he looks bloody ridiculous @TheGNShow.”

And another furious person insulted Johannes as they raged: “There is a [blank] on Graham Norton inside wearing two hats. Why, just why? Worra [blank].”

Support for Johannes Radebe and his hat decisions

But away from those venting over Johannes’ decision to wear two hats, other Twitter users were delighted by the commitment to headwear.

He even came in for fond meme treatment referencing The Simpsons and Teletubbies for his outlandish style.

“Graham Norton. Johannes’s hat. I’m having that,” one person endorsed the pro dancer.

And another person tweeted at Johannes: “Loving the hat.”

The Graham Norton Show next airs on BBC One on Friday February 25 at 10.35pm.