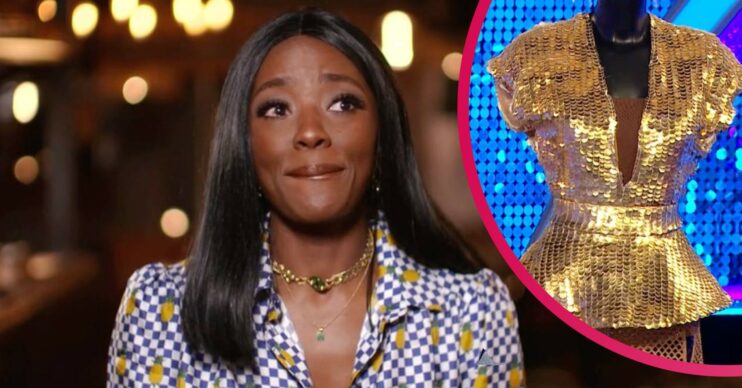 Strictly: It Takes Two viewers divided over outfit for AJ Odudu ahead of Saturday’s show

Fans say AJ will look like a "gladiator" wearing it!

Strictly: It Takes Two viewers have hit out at the show over the outfit choice for AJ Odudu for Saturday, with a fan branding it “horrendous”.

AJ’s outfit was revealed on It Takes Two last night ahead of her Salsa with partner Kai Widdrington in this weekend’s quarter-finals.

What happened on Strictly It Takes Two last night?

Things are getting serious in this year’s Strictly as the competition heads into the quarter-final stage. Five couples remain, and all of them want a spot in next week’s semis.

TV presenter AJ Odudu, and her dance partner Kai Widdrington, are one of the five couples left. The couple will be performing a Salsa this weekend to ‘Rhythm is Gonna Get You’ by Gloria Estefan and Miami Sound Machine.

On last night’s (Thursday, December 2) episode of It Takes Two, AJ’s outfit for the upcoming show was revealed. Strictly’s costume designer, Vicky Gill, joined Janette Manrara to show off what outfits the stars will be wearing this weekend.

Vicky unveiled AJ Odudu’s outfit to much fanfare on the show, and Janette seemed to be a big fan of it.

“This is epic!” the pro dancer declared.

AJ Odudu’s outfit this weekend is going to be a gold beaded dress. The dress wasn’t finished when it was unveiled on the show, but Janette said it gave her “army” vibes.

However, fans of the show were less than impressed with the outfit AJ Odudu is going to be wearing on Saturday’s show. Many took to Twitter to let their thoughts be known!

“AJ in a Lidl Gladiator ensemble? I’m so sorry, hun,” one sympathetic fan of AJ’s wrote.

“I feel bad for AJ, that outfit is horrendous,” another unimpressed viewer said.

“Right! I’m so glad I’m not the only one who thought that,” a fan said in reply to the above tweet. “Notice how nice the others were.”

What else did fans say about AJ Odudu’s dress?

“I don’t get it??” another fan moaned. “How will we see her hip action if she has a peplum hiding it?”

“I know, I really hope they get rid of it,” another viewer replied.

“Horrific!” another fan of Strictly cried. “I need to see AJ’s jive-inspired dress in like orange or red.. I can only dream I don’t think Vicky will change it.”

Contrary to what the viewers think, however, Vicky claimed on the show that the dress will give AJ more hip action.

“She’s going to be good isn’t she,” Jannette said.

You can catch AJ Odudu on Strictly tomorrow (Saturday, December 4) at 6.40 pm on BBC One and BBC iPlayer.

What do you think of AJ’s dress? Head to our Facebook page @EntertainmentDailyFix and let us know!