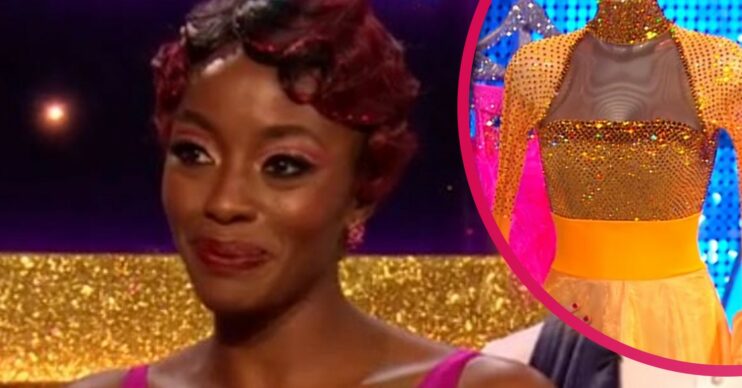 AJ will be dancing the Pasodoble this weekend

The star has been slaying the competition in recent weeks and has become one of the favourites to take the crown.

This weekend she’ll be dancing the Pasodoble on Strictly Come Dancing.

As a result, AJ‘s was one of the gowns to be teased on the latest episode of It Takes Two.

The bright yellow and bedazzled number was certainly eye-catching, and presenter Janette Manrara said she “loved” the colour.

“Lots of volume as you can see, I imagine there will also be a little bit of black,” revealed Strictly wardrobe expert Vicky Gill.

Despite Vicky insisting there were still numerous changes to be made, the reveal left some fans a little worried.

A handful rushed to social media to suggest that they weren’t the biggest fans of AJ’s look for the dancefloor.

Oh AJ, I am SO sorry, hun #ItTakesTwo #itt

A second tweeted: “Oh AJ, I am SO sorry, hun #ItTakesTwo”.

“Every week Vicky Gill reveals AJ’s outfit…why? There are other dancers you know. It’s like she gets priority treatment. Maybe next week…her outfit can be left behind and not shown. #ItTakesTwo,” ranted a third fan.

Meanwhile, a fourth added: “I can’t decide whether I love or hate this dress. Either way, AJ looks like a goddess in whatever she wears.”

However, others were kinder about the outfit.

Meanwhile, it could spell disaster for AJ and her partner, Kai Widdrington.

The pair recently showed off some painful-looking injuries ahead of this weekend’s dance, so they’re going to need all the help they can get this week!

AJ showed off a picture of her feet that were covered in plasters all over her toes.

She also shared a video of her pro partner, Kai, who had fallen over after making mistake during rehearsals.

AJ captioned the snap: “Sorry, but at least now we are both in pain together.”