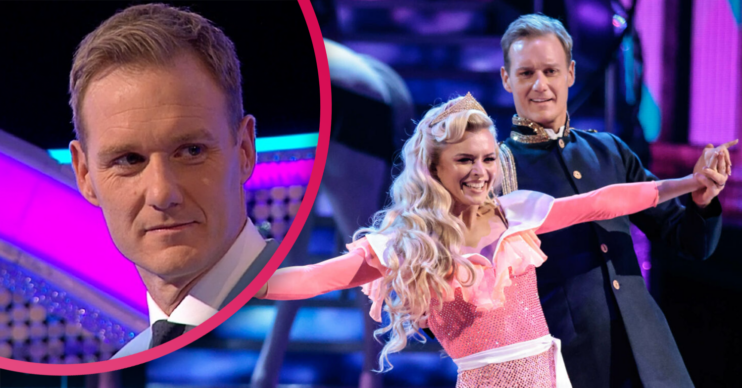 Strictly fans have claimed the show’s curse is happening in “front of their eyes” as they started to gossip about Dan Walker and Nadiya Bychkova following their appearance on It Takes Two last night.

Like all the other couples on the show, the BBC Breakfast host, 44, and his pro dancing partner have developed a firm friendship over the past few weeks.

And now viewers think there’s something more than a foxtrot going on – although they are definitely barking up the wrong tree.

What happened on It Takes Two with Dan and Nadiya?

During that show, Dan received his highest score of the series.

Read more: Strictly news: Dan Walker tipped as next to leave amid expert’s claims of tension with Nadiya

“I absolutely loved it,” he beamed.

Looking to Nadiya, he continued: “I said to Nadiya this week I only started dancing six weeks ago… that’s genuinely one of the best nights of my life.”

With Dan’s wife Sarah in the audience, he said it was “an incredibly special” evening.

“I genuinely felt it was just us two [looking to Nadiya] out there.”

#ItTakesTwo the strictly curse is happening right in front of our eyes!

Dan forgot about his wife for 90 seconds while dancing with another woman??? An eternity in hell awaits #ItTakesTwo

How did Strictly viewers react to the appearance?

Viewers were quick to pick up on the chemistry between the two.

One said: “#ItTakesTwo the strictly curse happening right in front of our eyes!”

Read more: Giovanni Pernice hits back as he breaks silence on split from Maura Higgins

Another exclaimed: “Dan forgot about his wife for 90 seconds while dancing with another woman???

“An eternity in hell awaits #ItTakesTwo.”

Calm down, viewers – clearly some over-active imaginations at work here.

However, as any Strictly fan will know, Dan paid a gushing tribute to wife Sarah after his dance last Saturday.

He told host Claudia Winkleman: “I’m going to gush over her for a moment because she’s one of those people that the more you know her, the more you love her.”

Dan added: “And I’ve known her and loved her for over half my life.”

The camera then panned to Sarah, with Dan continuing: “There she is. She’s absolutely amazing. She is such a special person and I love her to bits.”

What is Nadiya’s view on the Strictly curse?

Last month, Nadiya, 32, said that the so-called Strictly curse is “not a bad thing”.

The Ukrainian champion dancer was asked about the curse in a previous interview.

“If the relationship is strong, it’s strong,” she said.

“If it’s not maybe it speeds up the result which is not a bad thing. It’s a TV show. It’s a big thing with the curses.”

Nadiya, who is currently engaged to Slovenian football star Matija Skarabot, will dance the jive with Dan in this weekend’s live show.