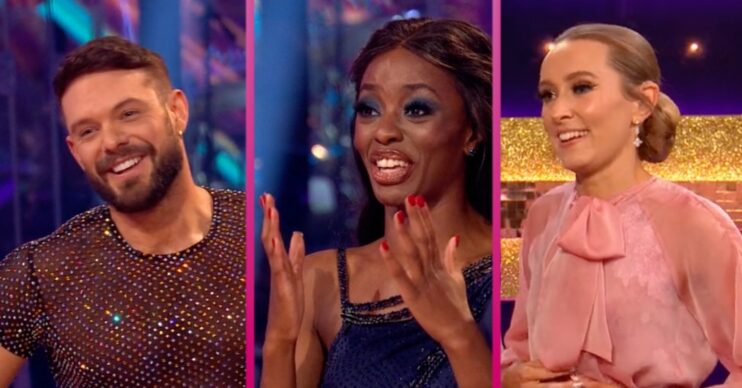 Is Darren's prediction the same as yours?

Body language expert Darren Stanton has revealed who he believes will come out on top in Saturday’s Strictly Come Dancing final (December 18).

Rose Ayling-Ellis, AJ Odudu and John Whaite will be battling it out for the famous Glitter Ball trophy in just four days time.

And, here, he reveals who he thinks will be crowned the 2021 winner of Strictly Come Dancing.

Strictly final: What did Darren say about John and Johannes?

Darren spoke to Betfair Casino about who he thinks will come out on top in Saturday’s Strictly final.

“My analysis is based upon the physicality of each couple and how comfortable they appear and interact with one another,” he explained.

“I’m looking for the level of rapport between each pair and whether the judges are expressing real emotion when giving their feedback to each couple.”

Of John and Johannes Rabede, Darren said that the Strictly duo were “two incredibly emotional guys”.

He then went on to say that their “moving performances” throughout the series have shown that they’re “deeply in the same zone”.

Darren then went on to say that John had “maintained, if not increased his game” on a weekly basis. He also said that it was obvious that the Strictly pair “clicked straight away”.

What did he say about Rose Ayling-Ellis?

On the subject of Strictly fan favourite Rose Ayling-Ellis, Darren said she ended up “stealing the show” last weekend (December 11 and 12).

Darren said the previous weekend, Rose looked “nervous” and “had lost confidence in her ability”. However, on Saturday she was “back to her best”.

“Her performances were very seamless, you could even say almost effortless,” he said of the 27-year-old. Darren then revealed that he’d noticed that Rose’s performance had “moved the judges”.

“An overwhelmed Motsi [Mabuse] was seen with a tear in her eye,” he added.

However, despite his high praise of Rose and John, Darren believes AJ Odudu is the favourite to win this weekend.

Why does Darren think AJ will win the Strictly final?

“AJ has the potential to be the eventual winner,” he told Betfair Casino.

He claimed that this could be down to her “strenghtened connection” with Kai Widdrington. This was something she displayed on Saturday, he claimed.

“The strength of their bond has reached new heights, with their near exit bringing them even closer together,” he said. “The pair have built a very deep state of rapport between them.”

Darren then revealed that the judges’ body language seemed to suggest they had similar thoughts regarding Kai and AJ’s connection.

“Anton [Du Beke] was very complimentary about AJ, while Craig [Revel Horwood] was the most positive he has been about AJ throughout the entire competition,” he said.

Darren also said that Shirley Ballas‘ delivery of her feedback to AJ and Kai was “truly heartfelt”.

“I would even go as far to say AJ could emerge as the frontrunner as the final nears in the coming days and go on to lift the Glitter Ball trophy,” he said.

With only a few days left until the Strictly final, fans will just have to wait and see who will end the series victorious!

The Strictly Come Dancing final is on BBC One and BBC iPlayer at 7pm on Saturday, December 18.

Do you agree with Darren? Who do you think will win this year’s Strictly? Leave us a comment on our Facebook page @EntertainmentDailyFix and let us know.