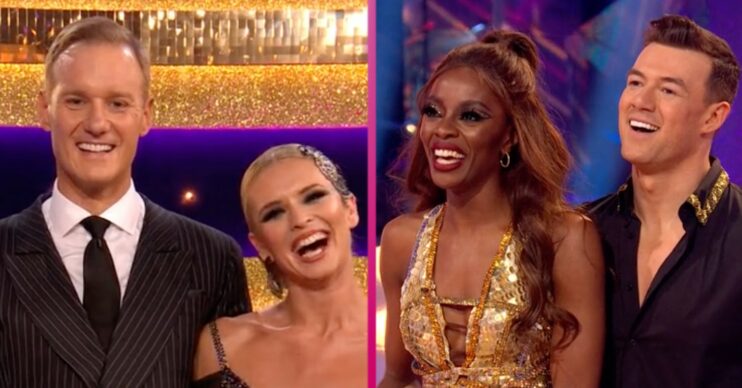 Strictly fans will be revolting if it's the 'wrong' result

Strictly Come Dancing fans are terrified AJ Odudu is going to be eliminated tonight (December 5) – instead of Dan Walker.

The television presenter and professional partner Kai Widdrington messed up their performance last night when a lift went wrong.

What happened with AJ on Strictly last night?

AJ ended up with her legs stuck around Kai’s neck.

He had to gently put her down and try to end the dance on a high.

However, it was spotted, with the judges calling it a “dance disaster”.

Head Strictly judge Shirley Ballas called it “unfortunate”, adding: “Pure sass and full of attitude. I want to party with you.

“You are absolutely amazing, but like any quarter-final in any championship, it takes nerves of steel and things go wrong.

“And your ending – a bit like John and JoJo’s – it went wrong. It was just unfortunate.”

Anton du Beke went over the top with his criticism, shouting about how he wanted the ending to end quicker.

Craig Revel Horwood called it “unfortunate” but added: “That’s life. You’ve got to deal with it.

“The landings generally from the lifts were really, really heavy, your transitions were a bit ropey also, it was flat-footed.

“All that being said, you were totally watchable. Yes, the end was a complete dance disaster, darling but that can be fixed… one day.”

Meanwhile Motsi Mabuse said: “That ending killed me man. I was just like ‘girl come on, stop the music guys’.”

The scores landed them with 30 – and a place at the bottom of the leaderboard.

BBC Breakfast presenter Dan Walker and partner Nadiya Bychkova were one place above with 31 points – and Strictly fans are terrified he will survive another dance off.

One said: “It will be an absolute travesty if AJ goes & Dan stays. #Strictly”

A second said: “I’m not even exaggerating here but the thought of AJ & Kai going home this week legitimately makes me feel sick.

“Especially if Dan gets through. I think he’s a lovely man but he shouldn’t be going through over the likes of AJ #Strictly”

A third said: “Every week AJ and Kai bring great energy and musicality…even with their mistakes.

“I shall continue my anti Dan Walker campaign by saying there is no way he is a better dancer than AJ and I’ll involve the UN if he goes through ahead of them. #Strictly”