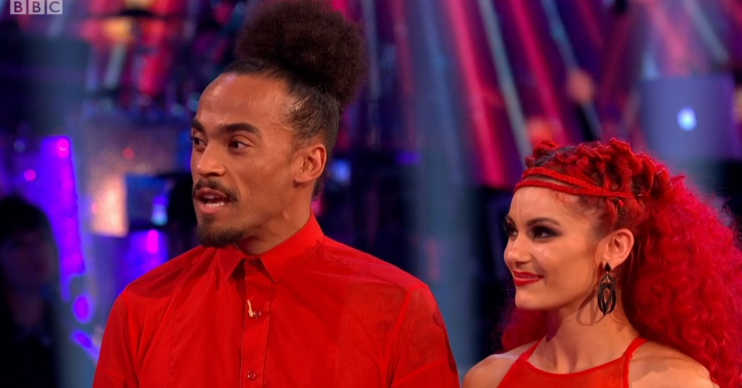 Dev and Dianne Buswell left the competition at the weekend

Fans of Strictly Come Dancing are demanding the BBC to release their voting stats after Dev Griffin’s controversial elimination from the show.

The radio presenter, 34, and his professional dance partner Dianne Buswell, 30, were given the boot on Sunday following a dance-off against Viscountess Emma Weymouth and pro Aljaz Skorjanec.

Many viewers were fuming with the result, with some branding the show a “fix” as they were unable to vote for Dianne and Dev because phone lines were apparently “too busy”.

Now, fans have launched a petition to demand the BBC release their voting statistics.

The appeal on Change.org says: “The BBC has not been held to account for these two things and remains ‘above the law’ when it comes to explaining itself to the voting public.

“Two contestants with some of the largest online fan bases – Dev and Emma – found themselves in the dance-off.

“Their social following sizes (both the celeb and the pros combined) are much larger than the celebs who were voted through to the next week.

“The number of people saying they were voting for Dev and Dianne and Emma and Aljiaz on the night was much higher than for other celebs.”

Dont think I can bare to watch @bbcstrictly anymore after what they’ve done to Dev and Dianne, Dianne was devastated crying and it’s just not fair that so many people tried to vote but couldn’t. They deserved so much better. Biggest fix I’ve seen #Strictly #Strictlyresults

It continued: “The voting phone lines failed for some contestants and not others.

“Meanwhile, the judges on the night seemed to be ignoring all technical competence of celeb contestants and handing out scores randomly, most likely at the demand of the producers, to keep the less talented dancers in the competition.

“Strictly is a national institution and its viewers deserve not to have their intelligence insulted in this way.”

The petition then lists what it wants from BBC bosses including, “releasing vote volumes by contestant for both phone and online” and for them to “film a special ITT [It Takes Two] in which the judges explain their irrational scoring”.

They also want “a statement from the producers to reassure the public that they do not seek to influence results in any way” and for them to “provide a clear policy statement regarding pro dancers use of social media and the extent to which it is controlled by the production team”.

It comes after viewers complained they were unable to get through on the voting lines.

Strictly is a national institution and its viewers deserve not to have their intelligence insulted in this way.

At the weekend, the official Strictly Twitter account said: “There’s a high volume of calls tonight, so if you don’t get though first time keep trying! And remember you can vote online.”

Meanwhile, in a statement to the Daily Mail newspaper, a spokesperson for Strictly added: “The phone line blockages impacted all contestants equally — and that the likelihood of getting through was not dependent upon the celebrity fans wanted to vote for.”

There’s a high volume of calls tonight, so if you don’t get though first time keep trying! And remember you can vote online.

Read more: Strictly judges slammed for most controversial elimination of series so far

During last night’s It Takes Two, Dianne said: “I was in a lot of shock, I didn’t think Dev would be in the bottom two for a while if not at all.

“He did an amazing job on Saturday night and I thought his dance-off dance was even better so I’m so proud of him and really upset that we were in the bottom two and we happened to leave the competition.”

Dev added: “When I woke up that day, I didn’t think I’d be in the bottom two, but you can never tell, can you?”