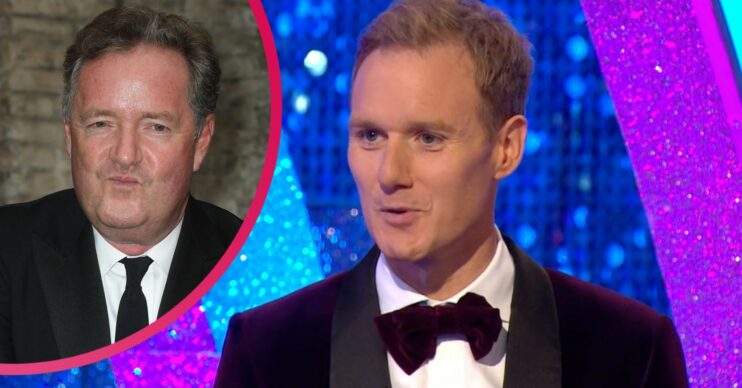 Strictly star Dan Walker has caught the attention of viewers, after failing to comment about rival Piers Morgan on It Takes Two.

The presenting pair have famously been involved in a bitter war of words over the past couple of years.

But as BBC Breakfast host Dan appeared on the Strictly spin-off last night, he cleverly brushed off Piers’ latest comment.

During the show, host Rylan Clark-Neal showed Dan a tweet from Piers.

Rylan started: “I think we have finally ended some beef from years gone by because Piers Morgan has been in touch!”

He then read the tweet, saying: “Very disappointing by Mr Dan Walker… I was hoping you would be a lot worse than that!”

I am far more interested in what my daughter thought.

Rylan continued: “That is a backhanded compliment and you know on this show he can’t moan about ratings!”

However, Dan managed to deflect the tweet and said ‘who’ when Piers’ name was mentioned.

Appearing with partner Nadiya Bychkova, he added: “That is true. I am far more interested in what my daughter thought.”

The moment didn’t go unnoticed with Strictly viewers, as they rushed to praise Dan.

On Twitter, one said: “Good subtle dis from Dan there. Don’t even mention Morgan. #ItTakesTwo.”

Another added: “Dan side stepping the Piers Morgan comment was brilliant. Inside voice Dan is saying what a [bleep] #ItTakesTwo.”

A fourth shared: “He couldn’t have dismissed that comment better if he’d tried go Dan @mrdanwalker.”

A fifth commented: “Well done Dan Walker on #ItTakesTwo for being presented with a tweet from P Morgs and just ignoring it, moving on straight away to talk about his family. Don’t give that man the attention he desperately craves. #Strictly.”

Well done Dan Walker on #ItTakesTwo for being presented with a tweet from P Morgs and just ignoring it, moving on straight away to talk about his family. Don't give that man the attention he desperately craves. #Strictly

Shouldn’t worry what Morgan has to say, he couldn’t even do the Hokey Cokey and get it right….#ItTakesTwo

Last week, Dan performed his first dance to Everybody Needs Somebody To Love by The Blues Brothers.

He managed to bag a score of 24 from the judges, which was enough to impress viewers at home.

The presenter also admitted that the performance delighted his daughter, Susanna, in the studio.

On BBC Breakfast, he shared: “I looked across to where Tess [Daly] normally comes down and that’s where my wife and my daughter were sitting and Susie had tears pouring out of her eyes, proper tears of joy.

“She gave me this lovely little wave to say ‘Well done, Dad’.”

Dan continued: “That was one of the highlights of my entire life because she absolutely loved it. That for me was perfect.”