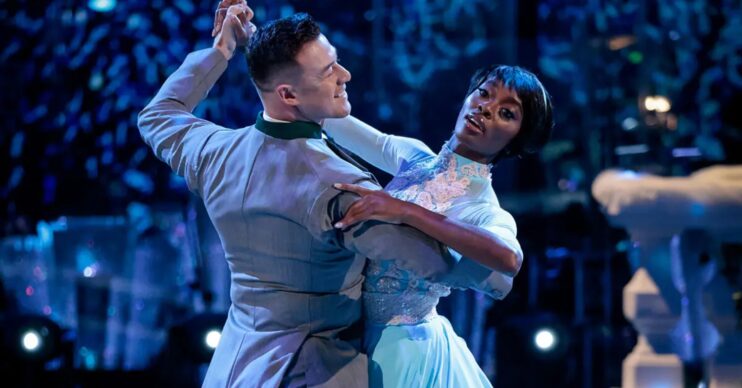 The video had us all emotional!

Strictly fans have been left in tears as AJ Odudu shared a heartfelt message to her dancing partner Kai Widdrington on her Instagram.

The pair didn’t manage to compete in the Strictly Come Dancing final due to her suffering a last-minute injury, and fans were heartbroken for the pair.

AJ shared a fan-edited version of one of their dances to her Instagram, as she looked back fondly on her time on the BBC show.

Presenter AJ Odudu shared a clip of her waltz with Kai to her Instagram and her 223k followers. She shared the touching message, as she wrote: “I loved watching @bbcstrictly Xmas Special & now I’m OBSESSED with the festive edit of our Waltz by @fayniandstitch.

“@kaiwidd’s waltz really is the gift that keeps on giving & I’m here for it.”

The clip showed their waltz from the series, which earned them a near perfect score of 38 out of 40 with the judges.

What did fans think of the Strictly video of AJ Odudu and Kai Widdrington?

Fans were quick to comment on the video clip and share their love for the dancing pair.

One fan wrote: “Absolutely stunning AJ and Kai. I miss watching Strictly with you two every Saturday,” followed by crying face emojis.

Another commented: “Awww this has got me all teary it is so beautiful @kaiwidd is the MASTER of choreography.”

A third shared: “Such a beautiful waltz AJ and @kaiwidd. So emotional. I’m not crying, you are!”

Fans also congratulated AJ on how well she danced. One fan wrote: “Stun-ning! Honestly, you must be buzzing seeing yourself dancing like a professional with a professional.”

Another congratulated her, saying: “This waltz was really magical a moment, I liked how clean and simplistic it was, yet so special and excellent in execution! One of the all time best memorable dances on Strictly.”

Are AJ and Kai a real-life couple?

The pair sparked rumours that there might be romance behind the scenes as they appeared to get closer and closer each week on the BBC show.

Even after their shock exit, the pair seemed closer than ever with Instagram posts from AJ making fans of the show wonder if the pair are a couple.

In a recent post, AJ shared some touching images of their rehearsals and dances. The star wrote: “Just missing @kaiwidd being my personal mode of transport TBH. I really did have his back.”

Fans are rooting for a romance between the two, as they commented on AJ’s post.

One wrote: “Aren’t you two together! C’mon did we all imagine the blazing romance?”

A second added: “Made for each other.”

In addition, a third said: “I want you guys to get together!”