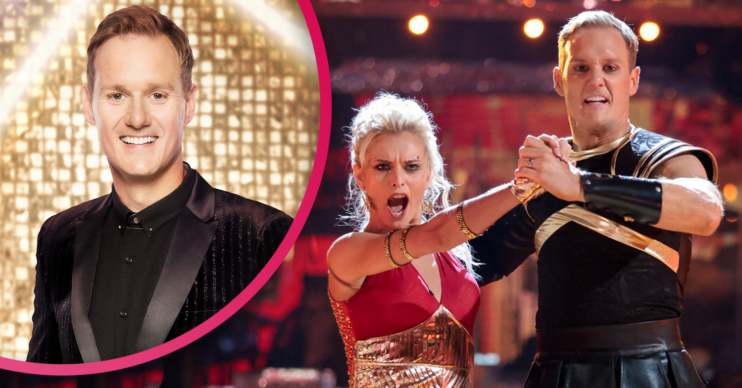 He scored 26 with his week two dance

However, some Strictly viewers declared he was overmarked and claimed it’s because he works for the BBC.

Craig Revel Horwood awarded them a seven, as did Anton du Beke.

But some viewers took to Twitter to accuse the foursome of “BBC favouritism”, declaring they didn’t deserve the scores they got and only got them because Dan works for the Beeb.

What did Strictly fans say about Dan?

After his paso, one Strictly fan commented: “Dan BBC favouritism much,” adding the hmmm emoji.

Others lumped Dragons’ Den star Sara Davies in with the overmarking claims.

“The overpraise/overmarking of Sara and Dan??? Is the the BBC employee clause kicking in?” one asked.

“BBC voting … how can Dan get those scores yet others did way better get lower scores?” a third asked.

Others commented that Dan’s paso was “overmarked” – and called into question his scores from week one.

“They’ve overmarked Dan twice in a row,” declared one viewer.

However, some Strictly viewers loved the performance.

“I truly liked your Paso Doble, well done Dan and Nadiya,” said one.

Another added: “Well done Dan, another strong performance. You can dance!”

By far the most overwhelming trend on social media last night though was Dan’s appearance.

Some Strictly fans wondered “who has Dan upset in the wardrobe department” with his gladiatorial outfit.

And many many others pointed to Dan’s “guy liner” – with some suggesting he wears it on BBC Breakfast.

What did you make of Dan’s dance last night? Tell us on our Facebook page @EntertainmentDailyFix.