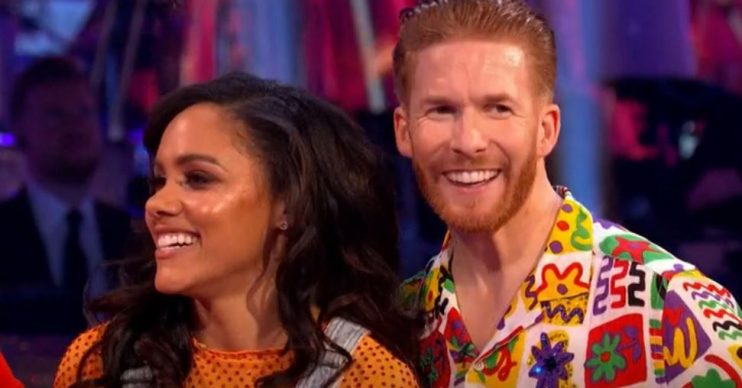 There's certainly chemistry between them

Fans of Strictly Come Dancing are convinced that pro Neil Jones and former footballer Alex Scott are in love with each other.

After the pair performed in the dance-off on Sunday night’s (01.12.19) episode against comedian Chris Ramsey and his professional partner Karen Hauer, the judges decided to save the latter couple.

On Twitter, viewers were convinced they saw a spark of romance between Alex and Neil – with some even claiming the duo are in love.

Read more: Craig Revel Horwood signs up to stay with Strictly Come Dancing for another year

One tweeted: “No one will ever convince me that Neil and Alex aren’t in love… #strictly.”

Another wrote: “Now Alex and Neil are out can they reveal they’re in love please? #Strictly.”

Now Alex and Neil are out can they reveal they're in love please??? #Strictly

After their elimination, Neil posted a gushing tribute to Alex on Instagram and told his followers she had made him feel “joyful” from “the first moment” they started out on their dancing journey together.

Posting a pic of the two of them on the show, Neil wrote: “Joyful Joyful was the perfect song to end our @bbcstrictly journey together because from the first moment we started together, that’s how you have made me feel.

“From day one, I have taken my time to get to know you @alexscott2 MBE as I really wanted to make sure that you enjoyed every moment.”

Now Alex and Neil are out can they reveal they’re in love please?

“Of course, I was there to teach you how to dance but you taught me sooooo much more and the biggest lesson I learnt was to always be myself and never change.”

In the comments, his followers were similarly convinced the pair are made for each other.

Another commented: “Keep dancing together, and you know, maybe dinner, and dating and being a couple because you really look like you belong.”

A third said: “Stop it! When are you going to announce you’re together?”

Someone else wrote: “You are the Megan and Harry of the dance world, hurry and ask her out on a date @mr_njonesofficial, you are perfect together.”

The remaining couples, who will compete in the semi-final on Saturday (07.12.19), are: Chris Ramsey and Karen Hauer, Emma Barton and Anton du Beke, Karim Zeroual and Amy Dowden, and Kelvin Fletcher and Oti Mabuse.

Do you think Alex and Neil will end up together? Leave us a comment on our Facebook page @EntertainmentDailyFix and let us know.