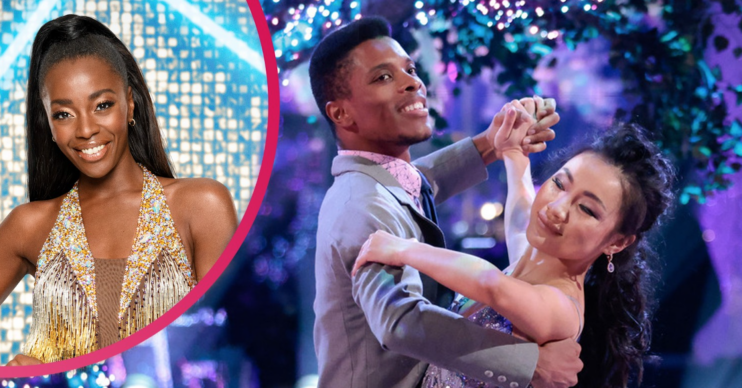 Fans want Rhys and Nancy back!

With the Strictly final only hours away, fans have called for Rhys Stephenson and pro-dance partner Nancy Xu to be reinstated after AJ Odudu had to sensationally pull out.

Furthermore, many said if they aren’t reinstated it won’t be a “real competition”.

Why did AJ Odudu have to pull out of the final?

The Strictly final was thrown into disarray this afternoon (Friday December 17) after the show confirmed that 33-year-old AJ had pulled out.

She had sustained an injury earlier this week and was seen walking on crutches.

And, this afternoon AJ issued a statement via the show’s official Instagram page.

It said: “I am deeply upset that I am unable to perform in the final due to a torn ligament in my right ankle.

“Thank you to the Strictly family for the experience, the medical team for trying to get me back on my feet…

“… and to everyone watching and supporting.”

She then wished remaining finalists John Whaite and Rose Ayling-Ellis all the best.

What did Strictly fans say about the final?

Soon, heartbroken fans demanded that Rhys and Nancy – who were voted off in the semi-final – were reinstated.

“Oh no. Bring back Rhys to the final,” one said.

Another asked: “Will they bring Rhys back for Saturday? So gutted to see AJ go.”

A third added: “The couple who came in 4th position should then replaced them & be part of the final! Only fair.”

Finally, a fourth commented: “I would say that SCD should bring back Rhyse and Nancy.

“They deserve to be in the final if AJ cannot compete. The final needs 3 couples to make it a real competition.”

Will the final be shorter than usual?

Prior to today’s announcement, AJ appeared on Wednesday’s It Takes Two.

Fighting back tears, she said: “Entering the final week, I literally am on crutches at the worst possible time.

“But I’m trying to power through.”

Sadly the injury was too much, and now the final is expected to be shorter than originally scheduled.

The BBC also issued a statement saying the final WILL be a two-horse race.

A rep told ED!: “The Strictly Come Dancing Final is on Saturday 18 December on BBC One and BBC iPlayer, with John and Johannes and Rose and Giovanni competing to win the glitterball trophy.”