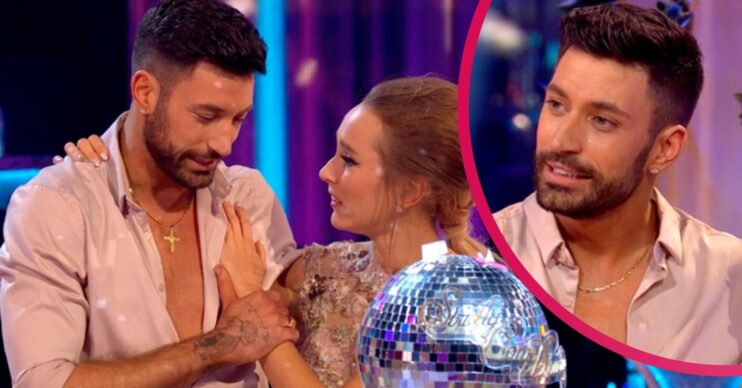 The pair stunned viewers with their incredible performances during the BBC One final last night (December 18).

But as Giovanni lifted the Glitterball Trophy with Rose, viewers were quick to comment on his “change” over the course of the series.

As the judges gave their thoughts, the star struggled to hide his emotions.

Fighting back tears, Anton said: “I’m glad you didn’t come to me first, you absolutely slay me every time I watch you dance, I am a wreck.

Read more: Motsi Mabuse fires back as Strictly fans accuse her of ‘not being happy’ with result

“Every time I watch you dance, when you see a moment like this a second time, it can sometimes lose its lustre, and all I have written on my page here is just perfect.”

“I forgot the silent dance was coming and now I’m crying again,” one said, while another added: “This Rose and Gio dance makes me cry every time.”

What did other Strictly fans say?

But while some praised the pair for their performances on the night, others commented on Rose and Giovanni’s partnership.

Many believed that the Italian dancer has “changed” following their time together.

“It’s my privilege to share the journey with you. I’ve definitely met a friend, a best friend for life.”

Shortly after the speech, one fan said: “He’s a changed man, well done on winning.”

A fourth added: “He’s never smiled so widely, he was energised, Rose was like a bolt of lightning to him. You could see he was loving every second of being with her, not just on the dance floor.

A fifth tweeted: “Perfect partner to get him to lift the trophy.”

He’s learnt as much from Rose as she has from him. The cherry on top of an already delicious cake 😂

Oh just beautiful! And Giovanni completely changed, way less arrogant than he has been in other years xx

Another posted: “Oh just beautiful! And Giovanni completely changed, way less arrogant than he has been in other years.”

One Strictly fan claimed: “Giovanni is a forever changed man thanks to his partnership with Rose #StrictlyFinal.”