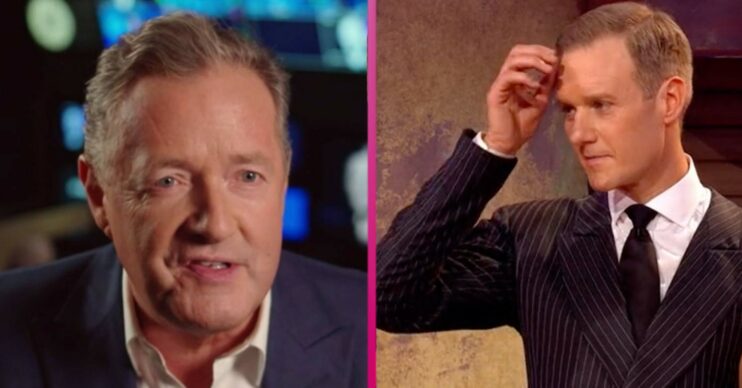 Strictly: Dan Walker hits back as Piers Morgan takes swipe at him after exit

Dan Walker had his eventful Strictly journey come to an end last night (Sunday, December 5), and Piers Morgan took the opportunity to make fun of the presenter on Twitter.

But the controversial 56-year-old probably wasn’t expecting the BBC Breakfast star to hit back the way he did!

What happened to Dan Walker on Strictly last night?

After 11 long weeks, many Strictly fans finally got their wishes as Dan Walker was eliminated. Many Strictly viewers had been calling for him to leave for weeks before he was finally given his marching orders.

Dan and his dance partner, Nadiya Bychovka, found themselves in the dance-off this weekend. They went up against AJ Odudu and Kai Widdrington for a spot in next week’s semi-finals.

The judges voted unanimously in AJ and Kai’s favour, and Dan was finally eliminated.

The 44-year-old BBC Breakfast presenter took to Twitter to pay tribute to his dance partner, Nadiya, after the show.

“Well…what a ride! Strictly has been a truly wonderful experience for me. I enjoyed every second,” he tweeted.

“Nadiya Bychovka is a superstar: kind, encouraging, funny, clever, the best teacher I could ever have hoped for & a great friend. Thanks for the support & thanks for having us.”

The replies were flooded with well-wishes from fans and celebrities alike.

What did fans and celebrities say about Dan Walker’s Strictly journey?

“You were both bloody fantastic mate! A lovely partnership and for me what Strictly is all about,” ex-Strictly-pro James Jordan wrote.

“Dan, you should be very proud. A true gent and a wonderful example to so many people. Keep dancing!” a fan said.

“Dan you were fantastic. You did so well to get to the quarter-finals. Gutted you have left the show,” another said.

But a certain Piers Morgan took the opportunity to mock Dan Walker’s Strictly exit, rather than give him praise.

There was no response from Dan last night, but the Strictly star hit back this morning, and his followers were loving it.

“Morning,” Dan replied. “I did think about walking off when @CraigRevHorwood gave me some grief in week two but… who does that?”

Dan posted a gif of Piers Morgan storming off the GMB set alongside the tweet. Piers famously left the GMB set following an argument with Alex Beresford about Meghan Markle back in March.

How did fans react to Dan’s swipe back?

Morning. I did think about walking off when @CraigRevHorwood gave me some grief in week 2 but… who does that? 😬😂 https://t.co/A1l8MV4fdg pic.twitter.com/WxVt4rHQ7x

Many fans were quick to praise Dan’s swipe back at Piers.

“I don’t even watch Strictly, but this retort is class,” one fan wrote.

There are now four celebrities left on Strictly following Dan’s exit. AJ Odudu, Rose Ayling-Ellis, Rhys Stephenson, and John Whaite will all be gunning for a spot in the final in this weekend’s semis.

Strictly Come Dancing continues on Saturday, December 11 at 7:05 pm on BBC One and BBC iPlayer.

What did you think of Dan’s reply to Piers’ swipe? Head to our Facebook page @EntertainmentDailyFix and let us know!