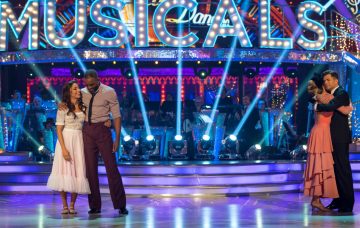 With only two weeks left until the winner is crowned, the pressure is on

Ashley Roberts will be hoping to avoid the dance-off for the third week in a row after this weekend’s semi-final, in which each couple will perform two routines.

Singer Roberts and professional partner Pasha Kovalev will perform a paso doble to Florence + The Machine’s Spectrum (Say My Name), and an American Smooth to Dean Martin’s Ain’t That A Kick In The Head.

She has survived two dance-offs after going up against former cricketer Graeme Swann and Casualty actor Charles Venn.

Steps star Faye Tozer and Giovanni Pernice, who are currently top of the leaderboard after scoring a perfect 40 for their Charleston, will perform a samba to Pablo Cruise’s I Go To Rio, and an Argentine Tango to La Cumparsita, from violinist Machiko Ozawa.

A picture sums up a thousand words! Thank you doesn’t even begin to cover how much I appreciate everyone’s votes for getting myself and @aj11ace to the semi-finals! 🙊 Thank You for your continued support and this week we will work harder than ever for next weekend 💗💃🏻🕺🏻 AJ I loved our American from my head to my toes! @bbcstrictly

Paralympian Lauren Steadman and AJ Pritchard will be doing a samba to Hues Corporation’s Rock The Boat and a tango to Tina Turner’s Nutbush City Limits.

Documentary-maker Stacey Dooley and her partner, Kevin Clifton, will take on a Charleston, to Spike Jones’ version of Five Foot Two, Eyes Of Blue.

They will also tackle a Viennese Waltz to Cilla Black’s You’re My World.

I can’t quite believe I’m typing this right now, but @diannebuswell & I are through to the semi finals of @bbcstrictly! Thank you so much for your votes and support each week. I’m having the time of my life and it’s all thanks to you keeping us in each week ❤️

YouTuber Joe Sugg will also perform a Viennese Waltz with his partner, Dianne Buswell, to David Gray’s This Year’s Love. Their other routine will be an Argentine Tango to Red Right Hand from Nick Cave & The Bad Seeds.

Asked about his time on the show, Casualty actor Charles said: “Well, I have to say first before I go into highlights; I have to thank my family for all of their support because obviously without them I don’t know if I would have got through half of this.

“This woman has been by my side and supported me, she’s been strict, she’s been solid, she’s been caring and loving, sensitive, intuitive, and I’m adamant that without her I don’t know how I would have got to this level.”

He added: “I’m so thankful. Thank you for the opportunity. Thank you Strictly Come Dancing. Thank you to the voters. Thank you judges because you guys saved our butts a couple of times so thank you, thank you.”

Strictly Come Dancing continues on BBC One on Saturday at 6.35pm.

Which couple do you think will be voted out next? Leave us a comment on our Facebook page @EntertainmentDailyFix and tell us.