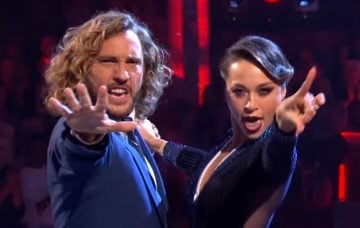 The pair were pictured kissing recently

It comes after reports claimed bosses had changed the pair’s upcoming routine to make it “less sexy” after they were both pictured kissing in the street after a night out.

After the photos emerged, Seann was dumped by his girlfriend of five years Rebecca Humphries and Strictly fans have even called for Seann and Katya to be axed over the scandal.

The pair have been back in training this week, after publicly apologising to their respective partners, ahead of their Charleston routine to Lunchmoney Lewis’ Bills.

The dance is not expected to involve as much contact as their Paso Doble last week, and following their kiss a source told the Mirror that Seann and Katya’s routine was made less “sexy”.

The insider said: “There was a feeling that the touchy-feely dance they were doing was not appropriate given the circumstances.

“The new one is much more fitting – no one wants to see them looking too sexy together, or too happy, when their partners are hurting.”

Time to reveal all the #Strictly routines for Week Four 👉https://t.co/c56vCyFfk0 pic.twitter.com/TBrM2xM4eM

It’s believed that Seann, 32, and Katya, 29, were originally scheduled to perform a rumba, salsa or Argentine tango.

What’s more, it was reported that professional dancer Katya had been asked to wear a less revealing outfit for the show.

It comes after Seann’s girlfriend hit out at him in a statement she shared on Twitter on Monday night, claiming he had called her “a psycho” and “mental” for suggesting “something inappropriate was going on” between him and Katya.

Rebecca also revealed she had ditched him and is “not sorry” for taking their cat.

In the statement, Rebecca wrote: “Those pictures were taken on October 3rd. It was my birthday. I was alone at home when Sean texted at 10pm saying the two of them were going for one innocent drink.

“We had spoken and I told him, not for the first time, that his actions over the past three weeks had led me to believe something inappropriate was going on.

“He aggressively, and repeatedly, called me a psycho/nuts/mental. As he has done countless times throughout our relationship when I’ve questioned his inappropriate, hurtful behaviour.”

She also said: “I wasn’t sure whether to respond to events from the past week, but I feel the narrative has missed a couple of crucial elements that I would like to clear up.

“It’s incredibly good of Sean(n) and Katya to apologise in the media. I have received nothing, other than the support of my family, friends, and a host of strangers on the internet who all wanted to make sure I was OK.”

It came after Seann and Katya both issued apologies to their Twitter accounts insisting it was an “one-off mistake”.

Dancer Katya said: “I’m so sorry about any offence or hurt I may have caused with my actions. I wasn’t thinking and it was a one-off mistake after some drinks.

Meanwhile, Seann wrote: “In light of the story in today’s newspaper I would like to offer my sincere apologies for my actions. This is no excuse but it was a one-off drunken mistake which I am truly sorry for (sic).”

In light of the story in today’s newspaper I would like to offer my sincere apologies for my actions. This is no excuse but it was a one-off drunken mistake which I am truly sorry for.

Seann has yet to respond to Rebecca’s statement. ED! has contacted his reps for comment.

Will you be watching Strictly this weekend? Leave us a comment on our Facebook page @EntertainmentDailyFix and let us know your thoughts.