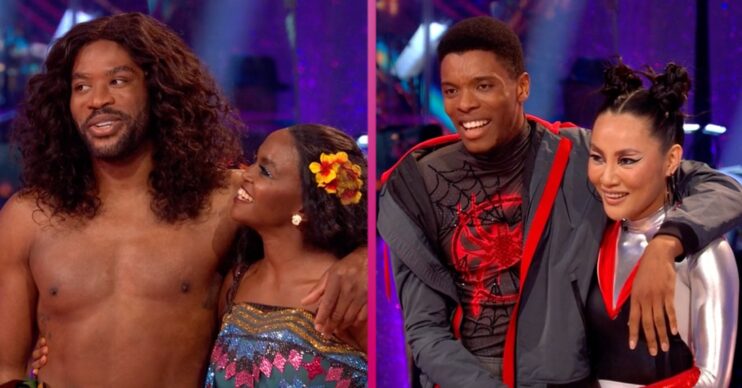 Or maybe there should be a themed week for Couple's Choices instead?

Fans of Strictly Come Dancing continue to have reservations about Couple’s Choice routines – with some suggesting they ‘should be banned’.

And while both couples scored well with the judges – with Rhys and Nancy racking up a huge 37 – there were still grumbles about whether it was fair for them to lean on theatrics rather than dance steps.

What is Couple’s Choice on Strictly?

The Couple’s Choice option was introduced to Strictly Come Dancing in 2018.

It allows partnerships to perform an alternative routine to the traditional ballroom or Latin dances.

It also means choreographers and dancers can emphasise their strengths and avoid moves they may not be so skilled at.

What complaints were made on social media?

Couple’s Choice seems to be an unpopular option with Strictly fans, with some suggesting it leads to ‘overmarking’.

Some social media users did not mince their words on the subject.

Another ranted: “It’s not right that couples choice just gets sprinkled in because anyone doing it has an advantage. Like making Adam [Peaty] do a rumba and then whatever the [blank] that was and trying to judge them side by side?”

It makes a mockery of the Strictly fundamentals.

Someone else echoed that thought: “The Couple’s Choice dances are so unfair on anyone who doesn’t have theatrical training.

“No wonder Rhys could perform that to a professional standard. It makes a mockery of the Strictly fundamentals.”

Others were cynical about the use of the Couple’s Choice, claiming it boosted scores.

One person claimed: “Having Couple’s Choice is unfair, especially in first few weeks.

“So much easier than the other dances as no technique to learn. Always marked high as they don’t have to take marks off for bad technique. And always a vote winner because it’s entertaining like a showdance #Strictly.”

Another agreed: “Couple’s Choice is just a smart way for celebrities to pad their scores every so often #Strictly.”

“Couple’s Choice and Charleston are always SO overmarked #Strictly,” tweeted somebody else.

And another Twitter user sighed: “Okay, okay, okay. Rhys’ and Nancy’s couples choice was very good, but giving it a ten in week three might be a bit of a stretch #Strictly.”

I’m not the biggest fan of couple’s choice except in the final but I loved Ugo and Oti’s dance as Loki andMoana just for being joyous. Great hair too ❤️. #Strictly

Other users proposed Strictly eliminate any possible ‘comparison’ advantage by ensuring the option is only an option when it is designated so.

“They should have a Couple’s Choice week or sack it off #Strictly,” suggested one fan.

And another agreed: “I think Couple’s Choice should be a themed week rather than these random routines here and there.

“At least then you can judge against other non-trad dances #Strictly.”