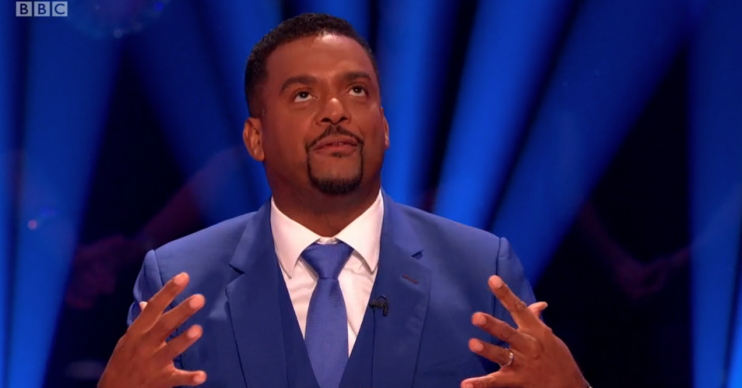 Stand in judge accused of dishing out "inflated" scores

Fresh Prince star Alfonso Ribeiro was welcomed back to Strictly Come Dancing with open arms last night – but some fans were not convinced by his scoring.

The 48-year-old actor was filling in for Bruno Tonioli once again following his popular previous appearance on the judges’ panel last year.

And although thousands upon thousands of viewers were thrilled to see him back – with many calling for Alfonso to be installed as a judge on a permanent basis –  there were observers on social media who reckon his approach to marking was not consistent with the other judges or prevailing Strictly standards.

Indeed, out of the twelve dances given a score by Alfonso on Saturday night, he was the highest or joint-highest marking judge in all but one of the performances.

He dished out a whopping five nines – to Kelvin and Oti, Karim and Amy, Alex and Neil, Emma W and Aljaž, Will and Janette – as well as a 10 to Saffron and AJ.

The former Dancing With The Stars winner also gave a bigger score than judging regulars Shirley Ballas, Motsi Mabuse and Craig Revel Horwood for seven of the twelve performances.

The ‘inconsistencies’ did not go unnoticed by fans on social media.

“Unpopular opinion – I HATE Alfonso on the panel. He takes it as a joke and dishes out pointless scores (yes a bit like Bruno I know),” tweeted one viewer.

“Alfonso is spoiling #Strictly. He is messing with the scores and I am not happy,” added another.

A third person joked: “After several weeks of crazy high scores, at least we have Alfonso to give even higher scores #Strictly.”

And another person contributed: “I’m loving the way that Alfonso knows he won’t be there to deal with any aftermath so is just chucking out high scores any time he feels like it.”

One viewer even claimed there was a formula to Alfonso’s approach.

There’s a pattern to the scores tonight!

However, it seems Alfonso’s crowd-pleasing tactics was a boost to those at home playing ‘Strictly bingo’.

One social media user explained: “I’m doing Strictly bingo… eating or drinking every time the lovely Alfonso scores higher than the other judges.

“I’m going to be full up before I manage to eat my tea 😂 #strictly #strictlybingo.”

Alfonso Ribeiro has been on the “Kool Aid” giving those inflated scores! #StrictlyComeDancing #Strictly2019 #Strictly pic.twitter.com/V7uegTa7bz