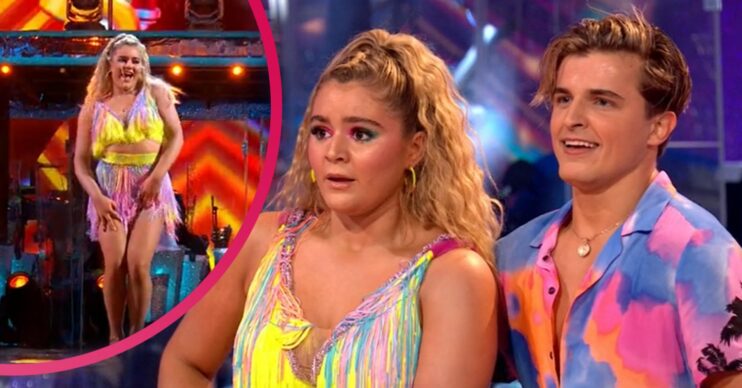 Strictly Come Dancing star Tilly Ramsay divided fans with her routine last night and some are predicting she’ll be sent home this week.

Tilly, the daughter of chef Gordon Ramsay, performed a Samba to Levitating by Dua Lipa with her partner Nikita Kuzmin.

However, Tilly found herself at the bottom of the leaderboard after receiving a score of 30.

Following Tilly and Nikita’s performance, the judges gave their feedback.

“A little bit with the slow quick timings were a little bit off there. But otherwise a really good go at a very difficult dance.”

However, Craig Revel Horwood told Tilly: “I thought it was a little bit awkward on your body and disconnected.

“There was unsteady footing also, shoulders were up and turned. Only in a small way.

“I’m not saying it affected the entire dance but I know you can do better.”

Finally, Cynthia Erivo – who was filling in for Motsi Mabuse – said: “I think you’re a better dancer than you realise.

“I really want you to keep enjoying what you’re doing. Just sit in it and enjoy yourself, let the sexiness come out and stop thinking about it. You’ve got it, alright?”

Following the feedback, the judges gave their scores with Craig and Cynthia giving sevens while Shirley and Anton each gave Tilly an eight.

On Twitter, viewers shared their thoughts with many predicting Tilly and Nikita would be sent home this weekend.

One person said: “Yeah…. Tilly is a goner this week. Especially with the complete over scoring of Dan [Walker]’s Rumba.”

Another wrote: “Surely Tilly is gone?”

A third added: “I think Tilly’s going home. Shame as she has really grown on me.”

Do you think Tilly will leave? Head to our Facebook page @EntertainmentDailyFix and tell us.