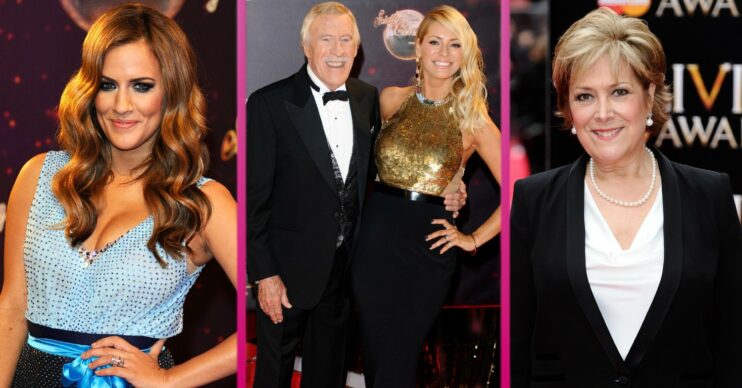 Remembering the Strictly contestants who are no longer with us

Strictly Come Dancing has seen many famous contestants wow the judges over the years.

However, sadly, there are many stars who’ve taken part in the show that are no longer with us.

Here’s a tribute to all the Strictly cast and crew who’ve sadly died over the years.

Love Island presenter Caroline Flack blew everyone away with her with her incredible routines on Strictly.

She eventually went on to win the show with her dance partner Pasha Kovalev after scoring the perfect 120.

In 2020, she was sadly found dead in her London flat at the age of 40, after taking her own life.

In a tribute to Caroline that aired on the show, Strictly judge Bruno Tonioli said: “She really was a joy. We will always love Caroline and we will never forget her.”

Magician Paul Daniels was known for hosting his Paul Daniels Magic Show with his wife and assistant Debbie McGee.

Even though he only lasted two weeks in the dance contest, Paul dazzled us all with his great efforts on Strictly in 2010.

Unfortunately he passed away 2016 due to a brain tumour.

Later, in 2017, his wife Debbie competed on Strictly in memory of her husband and made it to the final with Giovanni Pernice.

Celebrity chef Gary Rhodes is known for his love of cuisine and cooking.

In 2008, Gary also enjoyed a fabulous three weeks on Strictly where he gave it his all.

He fell while working in Dubai and sustained a head injury and died later from a subdural haematoma.

His professional dance partner Karen Hardy said on social media: “I am truly speechless and lost for words but my heart and thoughts go out to his beautiful family at this time.”

Actress Lynda danced beautifully with Darren Bennett on Strictly back in 2006.

Even though Lynda only made it to the fourth week, she was still one of the best highlights of the show.

She was diagnosed with cancer in 2013 and died a year later at the age of 66.

He was about to work on his fifth series of the show until he died at the age of 42 after complaining of chest pains.

Strictly’s head make-up artist Lisa Armstrong wrote on social media: “Utterly devastated and heartbroken over the loss of my sidekick and dear friend @Nealpirie such a talent and inspiration!”

Comedian Jason Wood made us all laugh throughout his appearance on Strictly in 2004.

He and his partner Kylie Jones were only on Strictly for a couple of weeks but their performances were certainly memorable.

Unfortunately, he died in his sleep in 2010.

He sadly died quite recently in June 2020 due to leukaemia.

Erin Boag tweeted: “I have truly wonderful memories of the time I spent with him. I feel honoured to have danced with this great man.”

Strictly’s legendary host Bruce Forsyth never failed to make us smile while he was hilariously presenting the show.

The nation’s favourite host passed away in 2017, three years after he left Strictly, after battling bronchial pneumonia.

His co-host Tess Daly paid a moving tribute to her friend: “From the moment we met, Bruce and I did nothing but laugh our way through a decade of working together on Strictly Come Dancing.

“I will never forget his generosity, his brilliant sense of humour and his drive to entertain.”