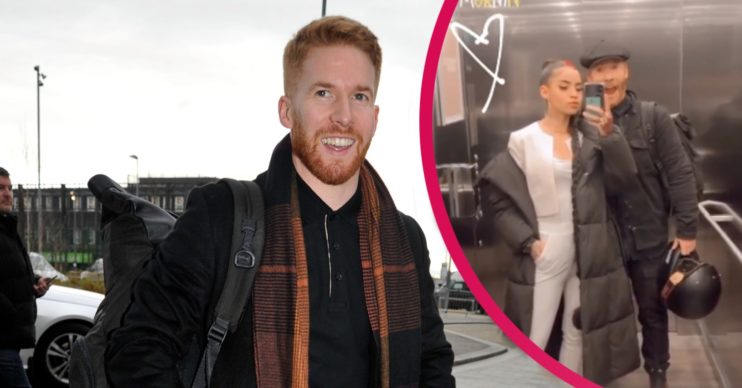 The professional dancer was keen to squash recent reports

The 38-year-old BBC star took to Instagram to prove the two were still going strong as they posed for a selfie together.

Neil reposted the snap from Luisa’s account just hours after reports revealed she allegedly cheated on him with a female Spanish student.

In the snap, the couple playfully posed as Luisa snapped away in a lift.

Despite recent rumours, the pair appeared happier than ever as Neil pulled a face for the camera.

According to The Sun, 23-year-old Luisa invited Daniela Becerra, 20, back to Neil’s north London home after a night out.

The publication also details Luisa drove them to his apartment in the Strictly star’s Tesla sports car.

The newspaper claimed Daniela said: “Afterwards, in bed, she told me she had actually dated a girl for two years. But she was now dating some new guy.

“Then she told me they were married. I was a bit shocked because I had no idea.

The couple previously sparked marriage rumours last month after Luisa referred to Neil as her hubby in an Instagram post.

Meanwhile, a source close to Neil apparently told The Sun: “He has met Daniela and knows her. He was in touch with Luisa while in the Strictly bubble, and knew of her night out.

“He was aware of Luisa inviting friends back to his flat. As far as he is concerned, Daniela and Luisa are just good friends. He trusts that nothing happened.”

Who else has Neil Jones dated?

They took to Instagram to announce their split in a joint statement.

During their marriage, Katya was pictured kissing her comedian dance partner Seann Walsh on a night out.

In reference to the shock snaps, Neil said: “We’re human, we all see things in completely different ways. We don’t all react the same way.

“That’s the thing with me. I’m in a good place and me and Katya get on really well now.”

Meanwhile, Neil was recently “demoted” to the role of back dancer for this year’s series.