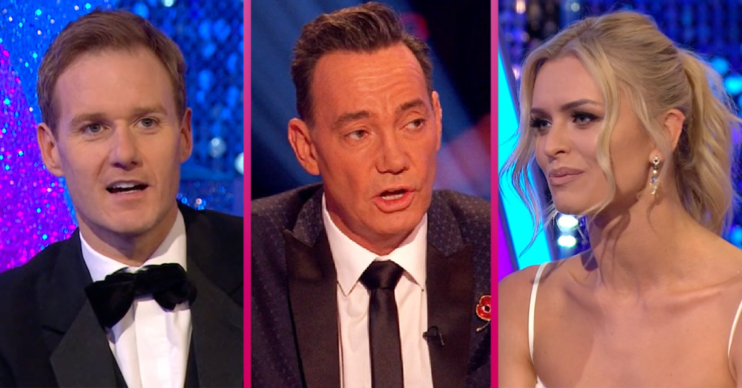 Nadiya stuck the boot in too

Strictly Come Dancing stars Dan Walker and Nadiya Bychkova have been accused of being “rude” to judge Craig Revel Horwood.

And what they said raised eyebrows with some viewers at home.

What did Dan and Nadiya say about Strictly Come Dancing judge Craig?

Janette asked Dan what he thought of the judges’ comments.

Craig had criticised his rumba last weekend and said: “It was jolty, the hip action was non existent but I can see that you’ve been working extremely hard.”

To which he replied with a giggle: “Who?”

Dan explained: “I do like Craig and it’s nice to have him back but I’d rather focus on what the other three judges say.”

He added: “I always listen to what the judges say and try to learn from it.

“I had a little chat with Craig afterwards and he was excited for the tango this weekend. Hopefully it’ll go down slightly better than the rumba.”

What did Nadiya say about Strictly judge Craig?

Nadiya also came under fire for her comments about the long-standing judge.

Read more: Judi Love admits she was ‘ready’ for the Strictly curse to strike her and Graziano

Chatting to Janette about the fact the other judges picked up on Dan’s subtle rumba moves, she referred to Craig as “the fourth one”.

She said: “I’m so happy the other three judges saw it and mentioned it, sorry about the fourth one, but it doesn’t matter.”

Strictly fans seemed to agree with Craig, with one declaring the BBC Breakfast presenter “rude”.

“Dan is so rude towards Craig. ‘I don’t care about Craig.’ Mate, he is the most HONEST judge on that panel. He is saying what he sees,” said one.

They added: “The other judges are sucking up to you and are scoring you too highly.”

Another seemed unimpressed with Nadiya’s comment about Craig and said: “Nadiya calling Craig ‘The Fourth One’.”