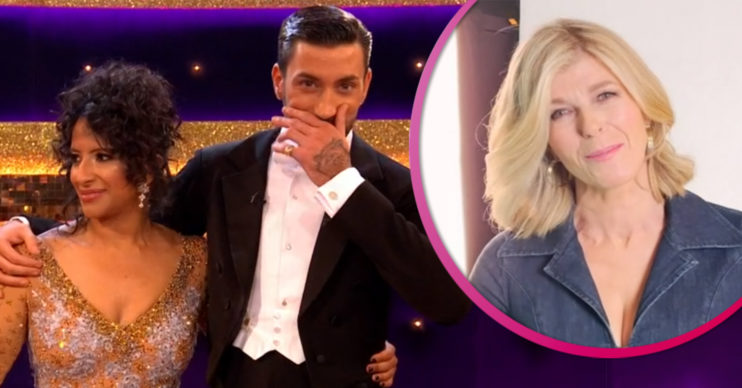 Kate congratulated Ranvir on getting to the semi-finals

Strictly Come Dancing star Ranvir Singh was stunned by a message from her GMB co-star Kate Garraway on the show.

During last night’s semi-final, Kate sent in a message to Ranvir to congratulate her on getting so far.

Ranvir said it’s “wonderful” that Kate found the time to think of her as her husband Derek Draper remains in hospital battling the after-effects of coronavirus.

What did Kate say on Strictly Come Dancing?

In the message, Kate told Ranvir: “Ranvir, the semi-finals?

“It’s just brilliant, good luck, hope you get to the final but whatever happens you are the absolute winner of this series.”

Ranvir looked moved by the message.

We all know you are amazing and now the world knows it too.

Standing alongside her professional partner Giovanni Pernice, she said: “We all know what she is going through.

“She typifies what everyone is going through this year. Actually it’s so wonderful that she found the time to think of me.

“That is her all over, so thank you so much to Kate, that meant so much.”

What happened between Ranvir and Giovanni on Strictly last night?

Meanwhile, last night, Ranvir and Giovanni performed a waltz to Un Giorni Per Noi and a jive to Candyman by Christina Aguilera.

For weeks, viewers have speculated whether there’s a romance brewing between the pair after spotting their chemistry.

Following their performances on Saturday evening, viewers are convinced Ranvir is “besotted” with Giovanni.

One person said on Twitter: “She is absolutely BESOTTED with him, isn’t she?”

Read more: HRVY and Janette: Viewers slam BBC for ‘setting them up to fail’ with rhumba

Another wrote: “Ranvir has definitely got the hots for Giovanni.”

Ranvir received 26 points out of 30 for her waltz. However, she bagged just 18 points for her jive.

In total, Ranvir and Giovanni got 44 points out of 60, meaning they were bottom of the leaderboard.

Do you think Ranvir and Giovanni will make it to the final? Head to our Facebook page @EntertainmentDailyFix and tell us what you think.