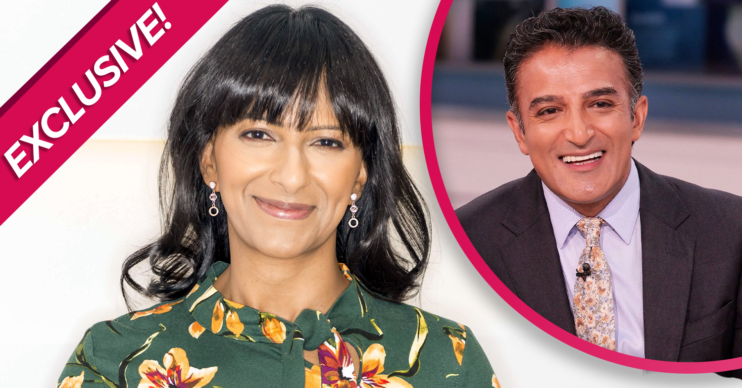 He's hoping she gets to do a Bollywood-style dance routine!

Strictly Come Dancing 2020 looks set to be a corker and there’s no one we’re looking forward to seeing dance more than GMB’s Ranvir Singh.

However, Ranvir’s Good Morning Britain co-host Adil Ray has told Entertainment Daily to look out for his breakfast TV co-star.

He reckons she could just be this year’s SCD “dark horse”.

He exclusively told ED!: “I’ve no idea if she can dance. She reckons she can’t but they’re always the dark horses.

Adil also said cheeky Ranvir had hidden the fact she was planning on taking part in the BBC dance show to her ITV pal.

I think she’s going to be brilliant, she’s such a lovely person, she’s so easy to get along with, everyone’s going to love her.

“You know what’s really funny,” he said. “There was a rumour going round that I was doing Strictly, I must have said something in a jokey way.

“So I messaged Ranvir when we were due to cover on GMB in July and I said: ‘I think we should wind up the audience a little bit. I might say I’m doing Strictly.’

Adil said the pair went on air alongside one of the show’s professional dancers and he “asked a couple of questions” about training for the show.

Read more: Katie Price reveals her feet ‘look like something out of a horror movie’

“And Ranvir, as professional as she is, she played along with it,” he said.

“She would’ve known she was doing it. I think she’s going to be brilliant, she’s such a lovely person, she’s so easy to get along with, everyone’s going to love her,” Adil added.

He’s also been on the wind up with his telly pal and has an idea for one of her dance routines.

This just in… GMB presenter, newsreader and journalist @ranvirtv is our latest signing. She's sure to make #Strictly headlines in 2020! ✨

“I’ve been winding her up saying we’re both of Indian background, Bollywood is such a big part of our culture and Bangra music, and that they should do a Bollywood dance.

“There are famous scenes where they get in their saris and dance in the rain. In Bollywood films, they never have sex scenes, but they do dancing around trees or dancing in the rain to allude to that’s the kind of moment where they would get close,” he added.

“So I’ve been winding her up that they should do that on Strictly and have water in the studio. She’ll look fabulous,” he laughed.

Head to our Facebook page @EntertainmentDailyFix and tell us if you’re excited to see Ranvir dance.