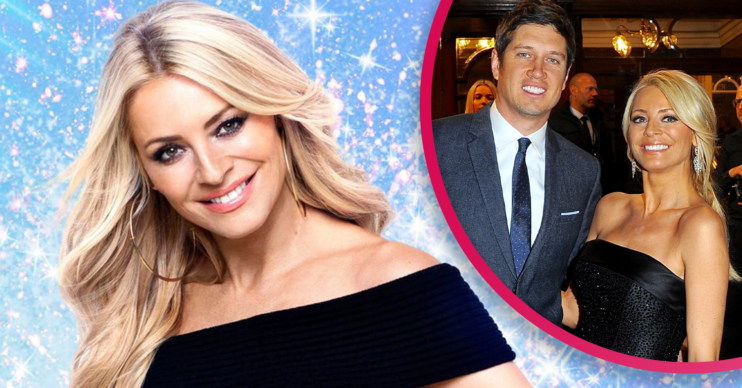 Strictly Come Dancing presenters: How did Tess Daly meet Vernon Kay? What is her net worth?

She's been on the BBC dance show since day one

Strictly Come Dancing presenters Tess Daly and Claudia Winkleman are set to return to host the show this autumn.

But how much do you know about blonde bombshell Tess’s life away from the camera?

We know all about her high-profile marriage to Vernon Kay, but how did they meet?

And who’s the family’s main breadwinner – Tess or Vernon?

Strictly Come Dancing presenters: How long has Tess Daly been on the show?

Tess has hosted the show since it started way back in 2004.

She initially hosted Strictly alongside Sir Bruce Forsyth – he left in 2013.

Since 2014, Tess’s new sidekick has been Claudia Winkleman.

Tess did miss half of the second season, though, having just given birth to her first baby.

She was replaced by Strictly champ Natasha Kaplinsky for three weeks.

How did Strictly Come Dancing host Tess Daly get her big break?

Believe it or not, Tess was scouted by a modelling agency outside McDonald’s.

Born Helen Elizabeth Daly, with Tess’s modelling career kicking off, she was told there was already a model called Helen Daly – and her agent advised her to change her stage name.

She’s modelled all over the world, living in Paris and New York for five years apiece.

While living in the Big Apple she started interviewing celebrities on the red carpet of A-list events.

And it’s there that she got her first taste of a career in front of the TV cameras.

So how did Tess and Vernon meet?

Tess and Vernon married at St Mary’s Catholic Church in Horwich, near Bolton, in September 2003.

The couple started dating in 2001 shortly after meeting on T4, which he presented.

Read more: Who is Strictly star Sara Davies and what is her net worth?

Looking back at the start of their relationship, Tess said: “It was all quite immediate, really, because we instantly had such a blast together.

“I couldn’t imagine having more fun with anyone else. It was pretty explosive, I tell you.”

However, their relationship hasn’t been without its ups and downs – one of which was particularly well-publicised.

So what happened with Vernon and Rhian Sugden?

In 2010, reports emerged that I’m A Celebrity star Vernon had been sending explicit text messages to model Rhian Sugden.

Although a rep insisted there was never a physical relationship between the two, Vernon did address the situation.

Speaking at the time on his Radio 1 programme, he said: “You may or may not be aware that, because of some foolish and stupid decisions I have made, I have let down a lot of people.

“To my family and everybody, I am very sorry,” he said.

Six years later, Vernon landed himself in hot water again after it was revealed he had been back in contact with Rhian.

He said: “I recognise how it may look when messages are pulled out of context but there was never any inappropriate intent to our communication.

“I was merely trying to find answers to questions that I’ve had since 2010.”

So how did Tess react?

Tess stood by her man – and admitted marriage is a “work in progress”.

She said: “Marriage is a work in progress. Vernon and I are just people, at the end of the day.”

How much is Tess Daly worth?

Tess’s current net worth is estimated to be around the £3 million mark.

It’s thought her current annual income is around £1m.

Vernon, on the other hand, is believed to amassed a net worth of around £2m.