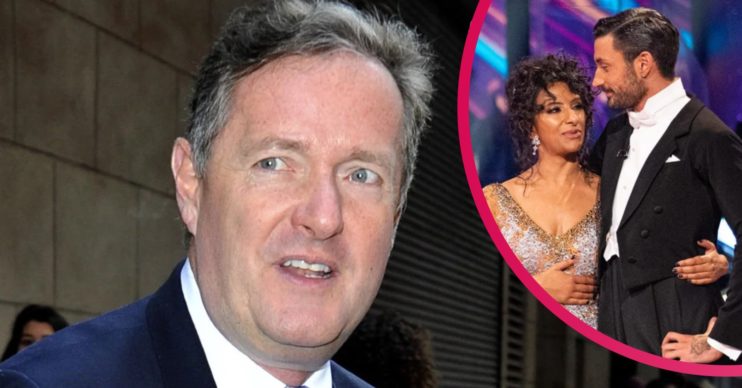 Piers Morgan has hit back at the decision to eliminate Ranvir Singh from Strictly Come Dancing.

The Good Morning Britain presenter, 55, labelled it a “travesty” as his co-star was sent packing from the BBC reality series last night (December 13).

Sadly, Ranvir missed out on a place in the Strictly finale after battling it out in the bottom two alongside Jamie Laing.

Clearly appalled by the outcome, Piers took to Twitter to voice his anger.

Alongside a series of emojis, he wrote: “Travesty! They should be in the final… ”

Most fans agreed with Piers, with one writing: “Her waltz was absolutely beautiful. No way on this earth should Jamie and Karen have got through, he’s been consistently awful week in, week out.”

A second commented: “Wrong decision by the judges in my opinion. @ranvir01 you are a winner in my eyes.”

A third shared: “They absolutely should have been in the final. I would watch Ranvir dance every week through 2021 and beyond, it’s been joyous.”

Meanwhile, others believed Jamie was the correct pick.

One stated: “Totally disagree, her ballroom was strong, her Latin was painful to watch, at least Jamie was somewhat consistent.”

Another wrote: “Absolutely not! Her jive was dreadful, she’s danced well but Jamie was the rightful winner tonight.”

Ranvir lands in the bottom two

The GMB star, 43, appeared devastated as she missed out on a place in this week’s finale.

Shirley Ballas made the final decision to kick Ranvir and her partner Giovanni Pernice off the show.

The TV judge said: “This is very difficult. I’ve grown to love both – I’m getting quite emotional now. Musicality, determination, conviction from both teams. They gave their all.

“But I just feel that one couple have a little bit more determination.

“A little bit more, ‘I’m not leaving without that trophy’. And with that in mind, I’m saving Jamie and Karen.”

Shirley’s decision sparked criticism among Strictly fans, with some claiming Ranvir was “robbed”.

She penned: “I couldn’t have done any more! My incredible partner – you @pernicegiovann1 tried your best to get me to the final and I’m just disappointed for you.”