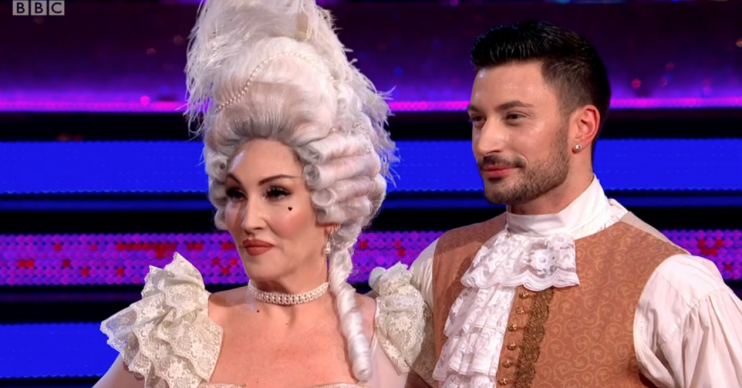 She and Giovanni Pernice lost out to Saffron Barker

The US TV personality, 51, became the ninth celebrity to leave the BBC One competition after she lost out in the dance off to YouTuber Saffron Barker.

Michelle and pro partner Giovanni Pernice found themselves rock bottom of the leaderboard on Saturday night, despite picking up a respectable 32 points for their couple’s choice – a street commercial to Vogue by Madonna.

Judges and viewers at home via social media made it clear how much they appreciated the routine’s bold theme, but it seems that did not translate into votes.

Read more: Michelle Visage ‘at war with BBC over her axing from Strictly Come Dancing tour’

Craig Revel Horwood remarked yesterday evening: “I loved the high styling of it and I loved the sentiment of it.”

And head judge Shirley Ballas added: “A dance is an expression to music and you used it fully. I also loved the sentiment.”

I loved the sentiment of it.

Meanwhile, Saffron and her partner AJ Pritchard racked up a score of 35 to finish fourth out of the seven acts remaining.

That, too, was not enough to keep them safe from potential elimination and demonstrates how every point counts as the contest reaches the later stages.

And although the standard of performances was very high for the annual bonanza in the north west, there was controversy elsewhere when Karim Zeroual was denied a perfect score.

Many fans felt the presenter had been ‘robbed’ of four 10s.

Veteran pro partner Anton du Beke will probably have fond memories of this trip to Blackpool, though. The 53-year-old achieved his first 10 in 17 years on the show!

And following a dramatic show, it seems the show’s stars made the most of unwinding before another week of hard training. According to a tabloid report, the post-show party in Blackpool for some continued until 5am.

Some of Michelle’s fans feel she lost her place in the competition because viewers didn’t understand the significance and importance of Vogue-ing, which is so rooted within the gay community.

I really thought Michelle would get to the final. It’s a shame to lose her so early on but there was very little dance content in her routine this week compared to Saffron and AJ. And that’s not me taking anything away from the sentiment behind her Vogue routine. #Strictly

A shame to see Michelle go, really enjoyed her every week. Sadly there was no real dance content in that routine, even though it looked great. #strictly

Michelle and Giovanni chose the wrong week to do a dance that involved no actual dancing. Should've done this one weeks ago. #StrictlyComeDancing #Strictly

Michelle was 100% one of the best dancers on the show but her dance this week was terrible and lacked content. When Saffron is a brill dancer too, it ends up being the fair result… #Strictly

Strictly Come Dancing returns to BBC One next Saturday at 7pm