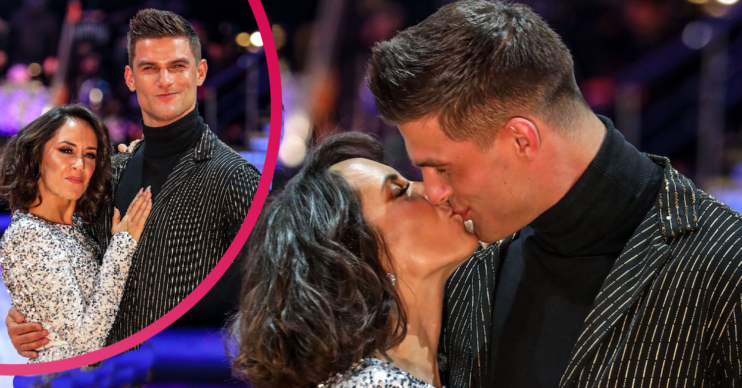 He's only got eyes for her

The married couple are currently touring with their Remembering the Oscars tour, which has already been postponed twice due to the pandemic.

And, speaking to The Press and Journal Evening Express while on the Aberdeen leg of the tour, Janette revealed her true feelings when other women lust over her hunky husband.

Talking about how her favourite dances in their set are the romantic ones that bring her closer to Aljaz, Janette was reminded that this made her the envy of lots of women.

The pro dancer was then asked if she was okay with this.

She said: “Absolutely. In fact, I find it quite complimentary. I’m very proud of him. The way I see it, I pick up some of the kudos. Other women might lust after him but I’m the one he comes home to!”

Do Janette and Aljaz have children?

Janette also added that she feels their love grows deeper by the day, saying: “The more time we spend together, the more the love deepens. I think about the future a lot. In 10 years’ time, children will be part of the picture.

Read more: Aljaz Skorjanec celebrates his birthday with the cutest ever baby photo

“And I hope we’ll have a beautiful home out in the country. Health and happiness – they’re the goal.”

Remembering the Oscars sees the couple dance a host of routines from famous films throughout the years.

La La Land and Ghost are just two of the movies to get the treatment.

Janette has taken a side step from being a professional dancer on Strictly, to hosting spin-off It Takes Two.

She also took on hosting duties for the Live Arena Tour which ended last month.

Janette pleaded for one last dance on Strictly

The dancer recently confessed to pleading with Strictly bosses for one last dance before moving over to It Takes Two.

Speaking to Lorraine Kelly on her show back in February, the 38 year old said: “When I got offered to do It Takes Two, obviously it was like the fastest yes, it was such an honour to host the show.

“But I begged the producers the whole series, I was like: ‘Just give me one last dance, one last moment to say goodbye that floor,'” she revealed.

“They actually called me on my birthday to tell me that Aljaž and I would be dancing together with Ed Sheeran in the final,” she said.

Remembering the Oscars runs until the end of April. Check out Ticketmaster.com for tickets and prices.