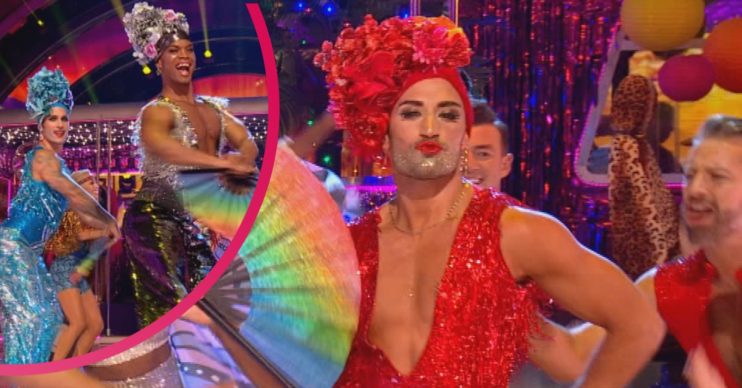 The Strictly pros performed a medley of hits from Priscilla: Queen of the Desert

Strictly Come Dancing has reportedly been hit with over 100 complaints following the show’s first ever drag performance.

The BBC reality series thrilled viewers as male pros Johannes Radebe, Giovanni Pernice and Gorka Marquez wore fringed dresses and heels whilst performing a selection of hits from Priscilla: Queen of the Desert.

But the high-energy routine didn’t sit well with some, who took to the BBC to complain.

According to The Sun, the performance received more than 100 complaints.

Meanwhile, broadcasting regulator Ofcom confirmed a small number of complaints were made.

Most fans were left stunned by the incredible routine, which saw Johannes, Giovanni and Gorka in full makeup.

Taking to Twitter to defend the show, one said: “Unbelievable! Johannes is just amazing! To the 100 odd people that want to write complaints, save yourself the energy and accept that you just wish you could strut in heels like they just did.”

Another wrote: “Absolutely loved it. I presume all those complaining about it ‘being a family show’ have never considered taking their children to the pantomime?”

A third added: “Imagine being so upset because Gio, Gorka and Johannes were in drag and danced with boys in yesterday’s #Strictly that you actually take time out of your day to make a complaint… It was amazing! We love to see it.”

A fourth praised: “Loved every second. I think we all need a proper introduction to the other two male professionals in all these numbers, because they are brilliant!”

A fifth joked: “My only issue with the opening is they all had way better looking legs than me.”

Earlier this week, the ballroom star branded it a “shame” as viewers went as far to complain over the number.

“It is a movie and this wasn’t just camp time, we weren’t just frocking up for sake of it – it is the movie Priscilla and if you’ve seen the movie you’ll know what it’s all about. I thought they did a great job of it.”

Anton added: “It’s hard though, when you’re getting trolls who send horrible things to you.”

The criticism follows shortly after Strictly judge Motsi Mabuse was forced to delete her Twitter account due to trolling.