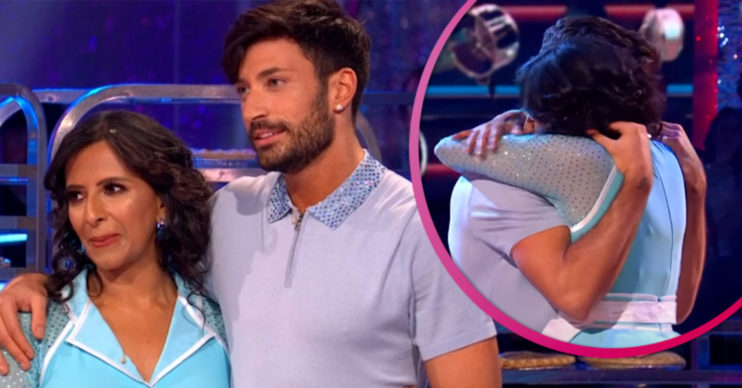 The pair have previously laughed off romance rumours

Romance rumours have been circulating for weeks after viewers spotted chemistry between the pair.

On Saturday evening, Giovanni and Good Morning Britain host Ranvir performed a Viennese Waltz to She Used To Be Mine for Musicals week.

What happened on Strictly between Giovanni and Ranvir?

They received 27 points out of 30 for their performance.

But one moment in particular left viewers melting on Twitter.

At the end of the routine, Giovanni was seen giving Ranvir a sweet kiss on her head.

Strictly fans couldn’t get enough and gushed about the moment on social media.

What did Strictly viewers say?

One person tweeted: “Please tell me I’m not the only one who can totally see through Giovanni and Ranvir?

“They’re so so obviously together and I love it!! They literally were about to kiss at the end. And they’re both single.”

Another wrote: “The little kiss on the head from @pernicegiovann1,” followed by a heart emoji.

A third added: “He kissed her head, she kissed his cheek… I ship it I don’t even care.”

The little kiss on the head from @pernicegiovann1 💕😌 #Strictly

he kissed her head, she kissed his cheek…i ship it i don’t even care 🤷🏽‍♀️🥰 #scd #strictly

Others were left in tears over Ranvir and Giovanni’s performance.

One added: “Ranvir and Giovanni just made me cry. Just beautiful. I love how they look at each other.”

He kissed her head, she kissed his cheek… I ship it I don’t even care.

Another gushed: “I just really love Ranvir and Giovanni.”

Meanwhile, Ranvir previously spoke out about the romance rumours surrounding herself and Italian dancer Giovanni.

She said she and Giovanni “find the idea that we might get hit by the curse very funny”.

In an interview with OK! Magazine, Ranvir also said: “You know, Giovanni is so amazing, he doesn’t need me to be sensational!

“He sizzles all by himself. It doesn’t matter whether I’m in the room or not, he’s sizzling away!

“The dances are all about being romantic and, of course, we have to make them convincing.”

It comes after viewers said they had spotted chemistry between the pair.

One person said: “Ranvir and Giovanni are absolutely gorgeous together. Their chemistry is the best by far this year.”

Another added: “There’s definitely some chemistry between Ranvir & Gio isn’t there…”

Do you want Ranvir and Giovanni to win Strictly? Let us know on our Facebook page @EntertainmentDailyFix.