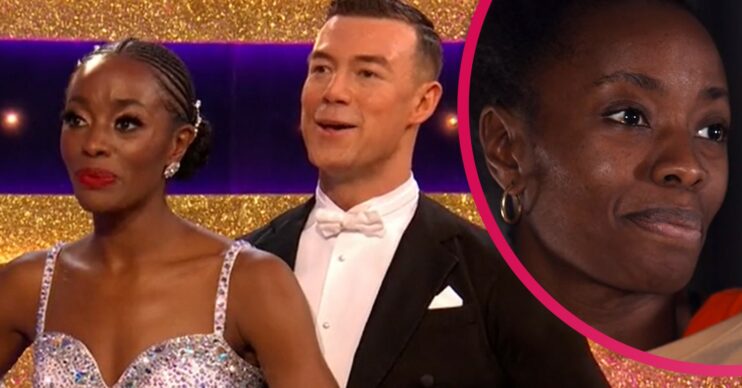 The finale will air on Saturday night

AJ and her professional partner Kai Widdrington have pulled out of Saturday’s grand finale following her injury.

The star was left on crutches due to a torn ligament in her right ankle.

Now following AJ’s depature, it’s expected that the final will be slightly shorter than originally scheduled.

It comes after AJ and Kai shared heartbreaking statements confirming their exit.

AJ admitted she felt “deeply upset” that she can’t perform in the final.

She added: “Thank you to the Strictly family for the experience, the medical team for trying to get me back on my feet and mostly, to everyone at home for watching and supporting.

“Strictly Come Dancing has been a lifelong dream and I’m glad it came true.”

Sending her luck to fellow finalists Rose Ayling-Ellis and John Whaite, AJ said: “Good luck to my partners in dance, John & Johannes and Rose and Giovanni.

What did Kai say?

Meanwhile, Kai praised AJ in his own statement and said he feels “absolutely honoured” to have danced with her.

He added: “I know we will be friends for life and I will be there for her through her recovery in whatever way I can.”

Fans of Strictly feel gutted to see AJ and Kai out of the final and shared their thoughts on social media.

One person said: “Unbeliavably gutted for them, they rocked it on the dancefloor every week.”

Another wrote: “Gutted about AJ and Kai. They were one of the best couples by far. Final won’t be the same without them.”

A third added: “Refusing to believe we don’t get to see AJ & Kai in the final. POSTPONE IT PLEASE.”

A fourth said: “Gutted for @AJOdudu and @Kaiwidd. One of my favourite couples this series and worthy finalists. Hope AJ gets better soon and we can watch her and Kai dance together again.”

The Strictly Come Dancing final will air on BBC One, tomorrow night, at 7pm.

Are you sad about the news? Head to our Facebook page @EntertainmentDailyFix and let us know.