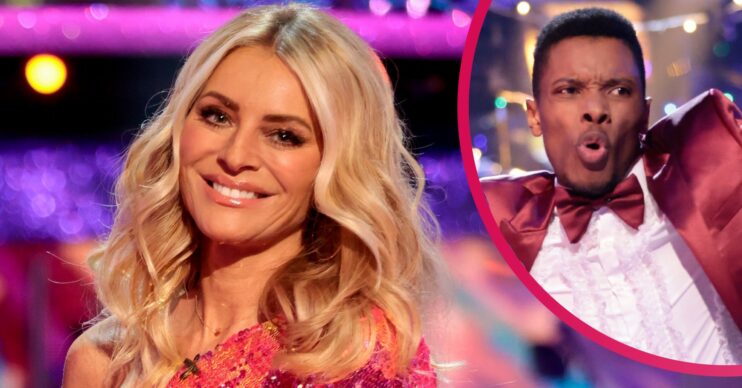 They felt it wasn't her place

Furious Strictly Come Dancing fans have hit out at host Tess Daly for pointing out contestants’ mistakes before the judges have chance to comment.

It was musicals week on last night’s show (Saturday, November 20) and Tess glittered in a pink sequined dress as she introduced the stars.

However, it was after Rhys Stephenson and his partner Nancy Xu danced that Tess made the comment.

What did Tess say on Strictly Come Dancing?

Rhys and Nancy had danced an energetic jive to Footloose from the musical of the same name.

The CBBC presenter had given it his all, but had gone slightly wrong during the routine.

When he approached the judges following his performance, Tess said: “There was a little mistake, but they loved it over there. It was a real crowd pleaser.”

An out-of-breath Rhys acknowledged his mistake saying: “I know, I know.”

But fans didn’t feel it was Tess’s place to point out mistakes.

Catching up on Strictly and bloody hell, since when did Tess start throwing the contestants under the bus when they’ve made a mistake! #Strictly pic.twitter.com/F2spQ9aN0d

Juat catching up on #strictly and raging at Tess passing comment on @RhysStephenson1! How unfair! 😡

Well I just watched #Giovanni and #Rose dance back and didn’t see any obvious mistake. Was #Tess told to say that in her ear piece because shes not a judge just a terrible presenter! #YourLittleFace 🤮 #Strictly

Why the FRAK did Tess feel the need to repeatedly highlight Rhys making a mistake? Like, quiet! 🤫 Maybe no one else had noticed dude! #Strictly

Just on catch up .#Tess shut UP,stay in your lane . Honestly,cannot abide this women.
Who the hell is she to be pointing out mistakes?#Strictly

I’m not sure it’s up to @TessDaly to point out mistakes – that should be left to the experts ! Sorry #Tess #Strictly

Tess pointing out mistakes before the judges have had their say. She’s the worst part of the show #Strictly

What did the judges say about Rhys’s routine on Strictly?

Judges Shirley Ballas, Anton Du Beke, Motsi Mabuse and Cynthia Erivo, who was standing in for Craig Revel Horwood, did pick up on the mistake.

Heading to Anton for comment, Tess again pointed out Rhys had messed up: “Anton, bar the mistake, did all the hard work pay off?”

Anton told Rhys: “This has given me a real problem watching you dance because your feet are a bit too ‘footloose’, the only problem is everything else is so brilliant, I’m a bit overwhelmed.”

Cynthia said she liked the joy in his performance. Motsi said she was “a little bit nervous” watching him dance and he needed to pay more attention to detail.

Meanwhile, Shirley told him: “There was a small mistake. You got on the wrong foot.

“It’s slightly, because of excitement, ahead of the music.”

She also told him to work on the details. Rhys went on to score 32 for his dance.