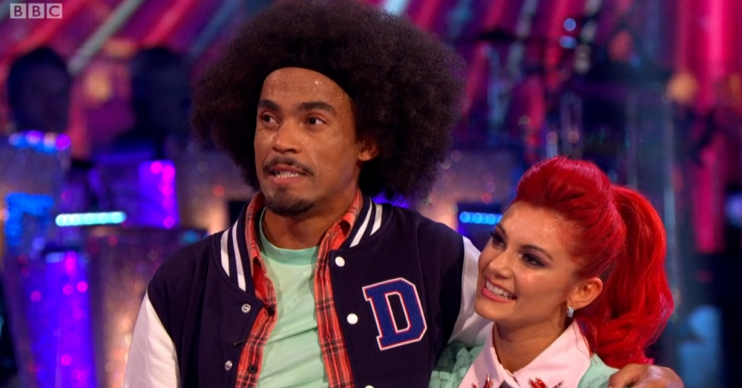 They’re currently dancing up a storm on Strictly Come Dancing, but all might not be well behind the scenes for Dev Griffin and Dianne Buswell.

The Radio 1 DJ has been playfully accused of “lying” to his professional partner by his radio co-host Alice Levine.

While the lie wasn’t a whopper, Dev’s little white lie could land him in training room trouble with Dianne when she finds out.

Big smiles on our faces going into movie week ! Thank you all for your votes and support 💕💕💕 team Red Devil’s live another week and we can not wait to get started tomorrow ! @lubamushtuk @jamescracknell you guys will be missed 😔 why can’t we all just dance every week !!!!!!

Speaking on their afternoon radio show, Alice said to Dev: “I have a question to ask you. Are you a truthful person? Are you someone to be trusted?”

Perplexed, Dev replied: “When have I ever lied to your face? Ever?”

Alice explained: “This is interesting because I know you pretty well. You have kicked me to the curb and you’ve upgraded for a better model.”

She added: “You’ve got a new partner in crime. Her name’s Dianne, she’s a professional dancer. In no way am I jealous.

“But what I’ve noticed is you’ve not been completely straight up with Dianne, have you?”

Assuring listeners he hasn’t lied to the lovely Dianne, Alice asked if Dev had been “truthful” when it came to his favourite sweet treat.

Alice continued: “You’re a very opinionated man and one of the weird things you have a very strong opinion on is cake. And you eat a lot of cake.”

“You said it brings shame on the cake name,” Alice continued.

She added: “And I watch a little video starring you and Dianne. And she’s like: ‘Dev’s favourite cake is red velvet.'”

Dev confirmed that he had indeed been receiving red velvet cake as a treat from Dianne during their rehearsals, as Alice added: “So have you lied to her face?”

“She [Dianne] said: ‘I get it for him as a little reward, it’s his favourite thing. It really puts a smile on his face.'”

Getting a lot of questions about how me and @thisisalicelevine prepare for a broadcast… Every week, always the same: by sitting as far apart as possible in front of an artificial fire in a hotel reception area. We discuss thoughts and ideas at increasing volume until we are asked to leave. Btw we’re on @bbcradio1 Friday-Sunday 1-4pm #themoreyouknow

Laughing, Alice added: “He hates it actually Dianne. He can’t stomach it. He can’t keep it down actually.”

Dev stuck up for himself and said: “Just because I said on the radio 30 times that I hate it, now that Dianne has given me red velvet cake I like it. What’s wrong with that?”

Dev and Dianne were placed fourth on the Strictly leaderboard at the weekend after dancing a jive to Olly Murs’ Dance With Me Tonight.