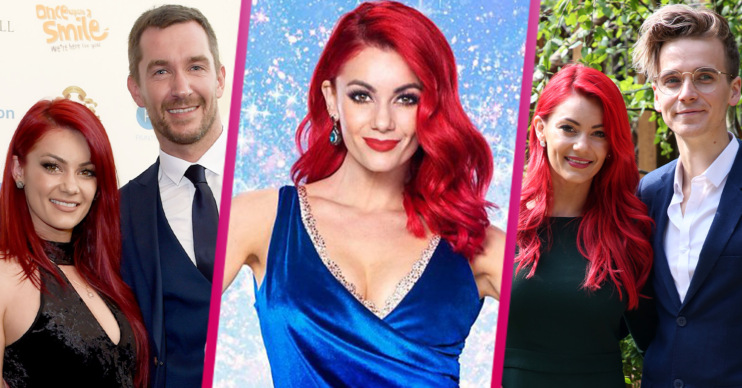 She went public with Joe Sugg eight weeks after their split

The Strictly Come Dancing professional dancers and this year’s unveiled celebrities are doubtless excited to get cracking on partnering up and starting to practise.

But along with that practise comes talk of the Strictly curse.

One such dancer who has fallen foul of “curse” gossip is Australian pro Dianne Buswell.

She was partnered with her current boyfriend Joe Sugg on the show in 2018 – while she was dating Emmerdale star Anthony Quinlan.

So were they hit by the curse or did things simply run their course?

Anthony has previously revealed all.

Dianne signed up to appear in the 2018 series of Strictly while she was dating ex-Emmerdale and Hollyoaks hunk Anthony.

Rumours were rife at the time that her boyfriend of 10 months had worries about how close she was becoming to celebrity partner Joe.

Read more: Why did Strictly pro Neil Jones split from wife Katya? Is he dating anyone now?

And, when they announced their split in mid-October of that same year, Anthony revealed if their romance had fallen victim to the so-called Strictly curse.

He told the Daily Star: “We’re still really good friends – it’s just distance played a part. There were all these rumours about the Strictly curse but it wasn’t that.

“I’m actually rooting for Joe and Dianne. I still think the world of the girl. We were really close, it just wasn’t meant to be,” he said.

How long has Joe Sugg been with Dianne Buswell?

Joe and Dianne went public with their romance on December 16 2018.

Sharing a loved-up selfie, he said on Instagram: “I may not have won the glitter ball, but I’ve won something a million times more special.”

The couple went on to confirm they were living together in August 2019.

And, in February 2021, they revealed that they had bought their first home together.

So will wedding bells be next on the list? We hope so!

Sadly not, but there’s always this year as she’s confirmed as one of the show’s 18 professional dancers.

She joined the show in 2017 and was partnered with Reverend Richard Coles.

The closest she came to lifting the Glitter Ball trophy was with Joe in 2018 when they came second.

She’s also been paired with Dev Griffin and Max George – with curse rumours flying once more when she taught The Wanted singer to dance.

Dianne is quite the colour chameleon and, after having a scroll back through her Instagram, we have no definitive natural hair colour answer for you.

However, a look at her roots over the years suggests she’s a shade of dark brown.

Known for her deep red locks, Dianne, 31, has switched up her look in recent months, opting for more of an orange hue.

However, with rehearsals for Strictly kicking off, Dianne has gone back to bright red.

She joked on Instagram: “Oops I did it again!”

The former hairdresser has also had a fringe cut and shared a picture with her followers.

“THIS IS NOT A HAIR HACK!!” she announced. “I got a fringe. I can’t help myself I just love to change things up.”

Who will Dianne be partnered with on Strictly this year?

The BBC is yet to announce its celerity pairings for 2021 – and even if Dianne will be paired with one of the 15 contestants.

However, she has admitted that being given a celebrity partner who isn’t a great dancer is “annoying”.

Dianne appeared on Iain Stirling’s CelebAbility and the host asked her: “When you get paired up with someone [bleep], is it annoying?”

Head to our Facebook page @EntertainmentDailyFix and tell us which of this year’s Strictly Come Dancing dancers you’ll be rooting for.