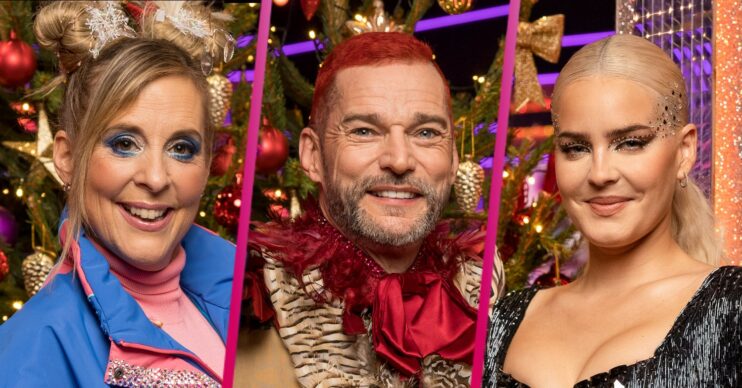 Strictly Come Dancing Christmas Special 2021: Who’s in the line-up and when is it on?

The Strictly Come Dancing Christmas Special 2021 is just hours away – and it has the line-up of dreams!

In fact, we think this year’s festive edition of the dancing show has THE best celebrity cast of recent years.

Yes, we’ve heard of every single one of them, and didn’t even need to use Google!

So who is taking part?

Jay told Rylan: “It’s probably one of the things I love the most, to challenge myself.

Comedian and actress Mel Giedroyc has signed up for the Strictly Come Dancing Christmas Special.

Of course, TV viewers will know Mel for her TV partnership with Sue Perkins.

They’ve acted in the likes of Hitmen together, as well as hosting Mel & Sue, Late Lunch and Light Lunch.

The comic duo also hosted The Great British Bake Off together between 2010 and 2016.

First Dates host Fred Sirieix has teamed up with Dianne Buswell for the Strictly Christmas Special 2021.

And the Frenchman has entered into the festive spirit by dying his hair bright red like his partner.

Maître d’hôtel Fred told It Takes Two host Rylan that it’s a “dream come true” to appear on the show.

He admitted he just couldn’t say no to signing up.

“I got the phone call and I was excited as I was scared.

Rylan then pushed for some details about the top-secret dance they’d be performing and Dianne revealed it would be based around food.

She teased that Fred would be “better than a Christmas pudding”.

She also said that Fred was the “perfect Christmas partner” and added: “He’s bringing me so much joy.”

The London-born host, 72, is recognisable as having been a newsreader for BBC News since 1981.

She’ll be paired with Aljaž Škorjanec, who has dressed as an elf for the occasion and we’re ALL over it.

Aljaž was paired with Dragons’ Den star Sara Davies on the current series, until they were eliminated on November 13.

Broadcaster Adrian Chiles, 54, is partnered with professional dancer and newcomer to the show Jowita Przystal.

Birmingham-born Adrian, who works across the BBC and ITV, said: “Discouragingly, every one of my family and friends with whom I’ve shared this news, has reacted with horror.

“They can’t believe I’m doing it, and neither can I.

“Thoughts and prayers with whichever poor dancer is lumbered with me.”

The dancer auditioned for a role on Strictly alongside her partner Michael, but sadly he did not land a place as one of the professional dancers.

Polish Jowita is currently appearing as a professional dancer on the 19th series of Strictly, although she is not partnered with a celeb.

The Voice judge Anne-Marie will also be joining the festive BBC competition’s line-up.

Music fans will know the singer from her hits Alarm, 2002 and Friends.

Anne-Marie has been nominated for eight Brit Awards.

At 30, she is the youngest by far to compete in the ballroom this year.

When It Takes Two host Janette Manrara quizzed Anne-Marie on who she sees as her biggest competition this year, Anne-Marie replied: “Honestly, all of them.

When is the Strictly Come Dancing Christmas Special on?

Viewers can watch the show on Christmas Day at 5.10pm on BBC One and BBC iPlayer.

After a year off owing to the pandemic, the Strictly Come Dancing Christmas Special returns to our screens with arguably its best line-up ever.

The Strictly Come Dancing Christmas Special 2021 airs on Christmas Day at 5.10pm on BBC One and BBC iPlayer.

Are you excited for the Strictly Come Dancing Christmas Special 2021? Leave us a comment on our Facebook page @EntertainmentDailyFix.