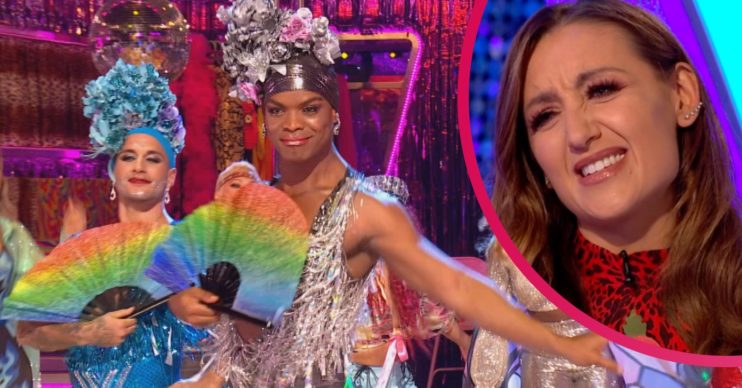 The BBC show was hit with over 100 complaints

Strictly Come Dancing star Catherine Tyldesley has hit out at complaints over the show’s first ever drag performance.

In her post, the actress labelled those who complained as “homophobic” and “judgmental” following the furore.

During Saturday’s show, Johannes , Giovanni Pernice and Gorka Marquez stunned fans as they wore fringed dresses, heels and make-up for a performance to hits from Priscilla: Queen of the Desert.

However, not everyone was impressed with the routine – and some even complained that it left their grandchildren “confused”.

Following the criticism, Catherine raged: “Confused their grandchildren my [bleep]!!! These ‘complaints’ are from homophobic massive twonks trying to train their kids/grandchildren up the same way.

“Strictly is inclusive… of EVERYONE. EVERY human being has a right to be present AND represented. Take your ridiculous homophobic complaints and plant them in some mud… maybe the rain will wash away your judgmental [bleep].

“Furthermore this entire routine and all dancers in it were a joy to behold, talented beyond words and lit up our screens in what has been a terrible year for many.

“Stop putting fearful clouds in front of the brightest of stars!!!”

Take your ridiculous homophobic complaints and plant them in some mud

While a fan added: “This was, without doubt, my favourite ever group dance of Strictly! I loved it, was a real joy to watch.”

The performance, which received over 100 complaints, was also defended by Strictly judge Craig Revel Horwood.

Chatting on Steph’s Packed Lunch earlier this week, the star revealed that he was “really sad” and “jealous” that he didn’t feature in the dance.

Speaking about the complaints, Craig explained: “It’s madness, it’s a form of theatre. They’re artists, they’re dancers and they are involving themselves in characters.

“I was just really sad that I didn’t make an entrance, I was so jealous, I wanted to be in there with a big blue emu on my head!”

He added: “I think it’s mad to complain about something like that.”