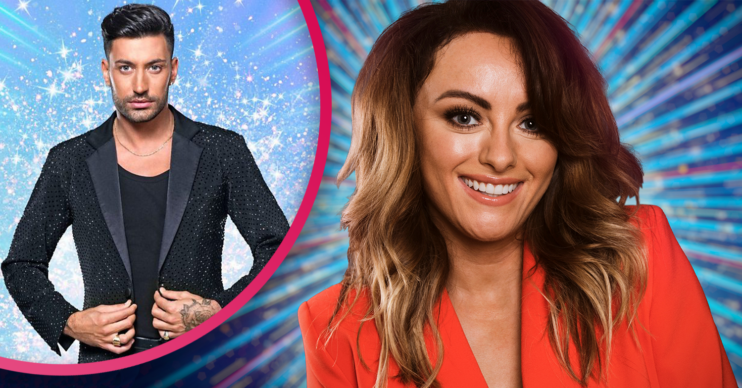 Things could be about to get a little awkward…

Ex Coronation Street cast member Katie McGlynn is among the celebrities waltzing their way into the Strictly Come Dancing ballroom this autumn.

Katie said she’s looking forward to “letting her hair down” and having fun on the dance floor.

However, she has previously been linked to professional dancer Giovanni Pernice, and eagle-eyed fans have spotted that she’s recently followed every pro except Giovanni on Instagram.

So what went on between them, and will things be awkward should they be paired together?

All you need to know and more below.

Katie was linked to Gio back in 2017, shortly after his split from her Corrie co-star Georgia May Foote.

At the time, Katie played down rumours of a romance, admitting: “They were trying to make it look like I was trying to have her boyfriend and I really wasn’t, even though they weren’t together any more, just because he’d dated another Corrie actress at some point.

“I was quite upset about it because I’d not done anything. It was blown up out of all proportion.”

However, eagle-eyed Strictly fans have apparently noticed that Katie has followed all the pro dancers on social media – except Giovanni.

Gio is now dating Love Island star Maura Higgins, so she’ll be hoping the Strictly curse doesn’t strike when the celebrities are paired with their pro partners.

Who is Katie dating now?

Her last boyfriend was a salesman called Benjamin Roberts, who she started dating in 2017.

They traveled to Thailand together on holiday and split two years later in 2019.

A source had previously said things were “going well” between the pair.

What’s Katie McGlynn been up to since Coronation Street?

A source has confirmed that Katie won’t be leaving the soap to focus on her Strictly stint.

Instead, her storyline will build to a Christmas climax as her stint in Strictly progresses.

Katie appeared in Coronation Street as Sinead Tinker from 2013 till 2020, when her character died of cervical cancer.

At the National Television Awards in 2020 she scooped the award for Best Serial Drama Performance.

Before joining the cast of the ITV soap she starred in Waterloo Road.

Head to our Facebook page @EntertainmentDailyFix and tell us if you’ll be rooting for Katie on Strictly.