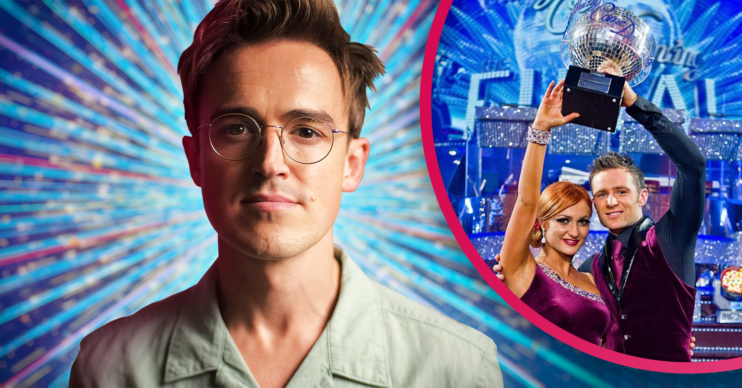 Harry and Giovanna will be rooting for him… Maybe!

Tom Fletcher, 36, was one of the first to join the cast of Strictly Come Dancing 2021 – and the pressure is most certainly on.

Not only is one of his McFly bandmates a former Glitter Ball trophy winner, his wife has also triumphed in a reality TV show.

Add to the the fact Tom is the current bookies’ favourite to win Strictly, and the pressure is certainly on for dad-of-three Tom.

Tom shot to fame as part of boyband McFly – but did you know that he originally auditioned for Busted?

The singer got his big break early on, playing Oliver at the London Palladium when he was just 10 years old.

He went on to audition for Busted, but lost out on a place to Charlie Simpson.

He said he was in the band “for approximately 24 hours”.

Busted’s loss was McFly’s gain though when the band formed in 2003.

Their debut single 5 Colours in Her Hair went straight to number one the following March.

How did Tom meet his wife Giovanna?

Tom and Giovanna met at the tender age of 13 when they both attended the Sylvia Young Theatre School in London.

In 2012, Tom and Giovanna tied the knot and they went on to have three kids.

However, while we’re sure the boys will be cheering their dad on, Tom has admitted they haven’t been impressed by his “dad dancing” in the kitchen.

“My kids were excited until I started showing them my best dad-dancing in the kitchen,” he said.

“I’m not sure how far they’ll get me in the competition but I can’t wait to add some new moves to my embarrassing dad-dancing repertoire.”

McFly drummer Harry Judd won Strictly back in 2011. He was teamed with pro dancer Aliona Vilani.

Speaking about Tom signing up for the show, Harry has piled on the pressure.

“I’m so pleased he’s doing Strictly. It’s a win-win for me,” Harry told The Sun.

“If he wins it’s great because he’s my mate and my bandmate, and I’ll be so pleased for him.

“But if he doesn’t win, even better, because I can always remind him of who did!” he quipped.

Also doubtless at the forefront of Tom’s mind will be wife Giovanna’s recent triumph in the I’m A Celebrity castle.

She emerged victorious and was crowned Queen of the Castle in the 2020 series.

Tom is currently the 4/1 favourite to win, with Robert Webb and Dan Walker just behind him on 6/1.

“But hot on his heels are Robert Webb and Dan Walker at 6/1, followed by decorated Olympian Adam Peaty at 7/1.

“EastEnders star Nina Wadia is the outsider at 25/1 in what is set to be one of the most fiercely competitive series in years.”

So which of this year’s Strictly Come Dancing hopefuls are you backing? Tell us on our Facebook page @EntertainmentDailyFix.