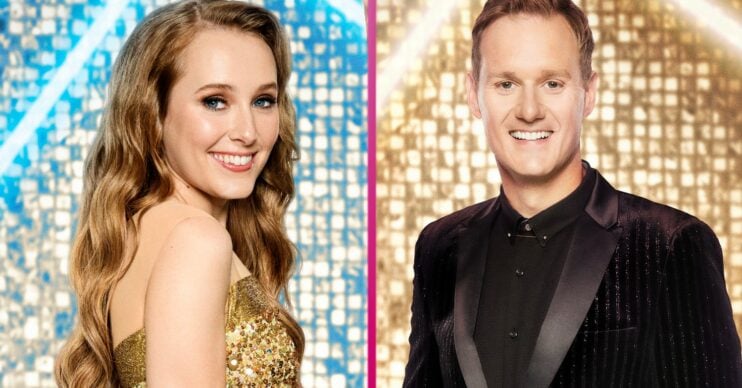 It's getting exciting now!

Strictly Come Dancing star Dan Walker is the bookies’ favourite to be eliminated this weekend while Rose Ayling-Ellis remains hotly tipped to win.

According to data from Betfair, BBC Breakfast presenter Dan could finally be saying goodbye to the SCD family. This is despite him never having been in the bottom two so far.

Betfair spokesperson Sam Rosbottom said: “Despite controversially never being in the bottom two, Dan Walker is the 8/11 favourite to be eliminated from Strictly next.

“He is followed by Tilly Ramsay at 2/1 and Rhys Stephenson at 3/1 to face the chop.”

Fans of the show already suspect that Dan will be heading home this weekend, saying his upcoming Rumba routine is “setting him up to fail”.

Read more: Motsi Mabuse pulls out of this weekend’s Strictly as replacement judge is announced

One viewer took to Twitter, saying: “Dan’s got the dreaded Rumba. May as well call it the kiss of death.”

Meanwhile, Rose is set to be the most popular star in Strictly history.

In fact, she’s such a hot favourite to walk away with the famous Glitterball Trophy that doing any actual dancing is just a formality.

Currently Rose and Giovanni Pernice are huge favourites to win. They have incredible odds of 1/5, according to BetVictor.

BetVictor spokesperson Sam Boswell told us: “The Strictly market has not seen a favourite this strongly supported in a long time.

“At 1/5 Rose is well on course and the next few weeks seem a formality having won the hearts of the voting public.

“Despite a top score of 40 last week Tilly Ramsay remains the biggest outsider to win at 50/1.

“Meanwhile supposed love birds Aj Odudu and Kai Widdrington are the most likely to prevent Rose from winner as second favourites at 7/1.”

Rose and Gio will be dancing the Pasa Double to Sia’s California Dreaming.

Rose has already made history

EastEnders star Rose, 27, has already made Strictly history by being the first ever deaf contestant.

She also smashed records scoring a perfect 40 for her Tango, the earliest 40 ever.

Read more: Strictly stars Rose Ayling-Ellis and Giovanni Pernice are closer than ever

Meanwhile, AJ Odudu and Kai Widdrington will be doing a Couple’s Choice.

Presenter Rhys Stephenson and Nancy Xu will perform a Waltz.

Tilly Ramsay and Nikita Kuzmin are dancing the Samba. John Whaite and Johannes Radebe will perform the steamy Argentine Tango.