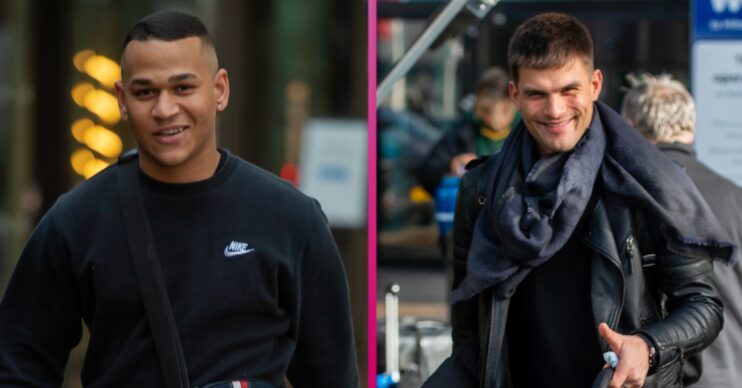 After the news that Aljaz Škorjanec is leaving Strictly Come Dancing, his replacement has reportedly been revealed with sources saying it’s going to be ‘his year’.

According to news reports, professional dancer Cameron Lombard is set to step into Aljaž’s dancing shoes.

21-year-old Cameron joined the hit BBC One show in 2021 but wasn’t partnered with a celebrity co-dancer.

Who will replace Aljaž Škorjanec on Strictly Come Dancing 2022?

He’s also been with the gang on the 2022 live arena tour.

Strictly bosses are currently planning the 2022 series and apparently want South African born Cameron as one of their stand-out stars.

If the reports are true, Cameron will be the show’s youngest pro dancer.

A Strictly insider told The Sun: “Cameron is a big character, as well as a hugely talented dancer. He was disappointed not to get a partner for the last series but 2022 is set to be his year.”

They added: “He’s already a favourite with hardcore Strictly fans who have seen him on tour, and bosses are confident mainstream audiences will follow suit.”

A spokesperson for the BBC told ED! that viewers won’t know which pros are getting partners until much later in the year.

Who is Cameron Lombard?

Cameron, who originates from Cape Town, is the South African Latin Champion.

In 2019, he represented his home country at the World Latin Championships.

The news comes after Aljaž’s surprise departure from the show was announced earlier this week.

Why did Aljaž leave Strictly?

The 32-year-old fan favourite announced on Instagram that he was quitting the dance show after nine years.

In an emotional post on Monday (March 28) he wrote: “On a beautiful sunny day in May 2013 one phone call changed my life forever!

“It went like this… We would like to offer you a position on @bbcstrictly as a professional dancer.

“A dream became a reality and it was the biggest opportunity for a 23 year old boy from Slovenia.”

He continued: “A little while ago I made the tough decision that Strictly 2021 would be my last.

“The show has given me an opportunity and freedom to create and express myself in front of millions of people every weekend for the last 9 years.

“The love and support I got from the team of producers was second to none.”

Fans were stunned by the news that Aljaž – who is married to It Takes Two host Janette Manrara – was leaving.

What is everyone saying about it?

Reports soon followed his announcement, claiming that he wasn’t happy behind the scenes of the show.

Earlier this week, The Sun also reported that Aljaž had clashed with producers and had been ‘verbally abusive’ to crew. However, a rep for the dancer slammed these claims as “untrue”.

The BBC issued a statement in response to Aljaž’s departure, saying: “We are so sad to be saying goodbye to Aljaž after almost a decade as a professional dancer.

“During his nine series he has provided us with some unforgettable moments on the show through his incredible choreography, passion for dance and heart of gold.

“He will be missed by his Strictly family, both on and off the dancefloor and we wish him only the very best as he embarks on his next chapter.”

So what do you think of this story? Head to our Facebook page @EntertainmentDailyFix and tell us.