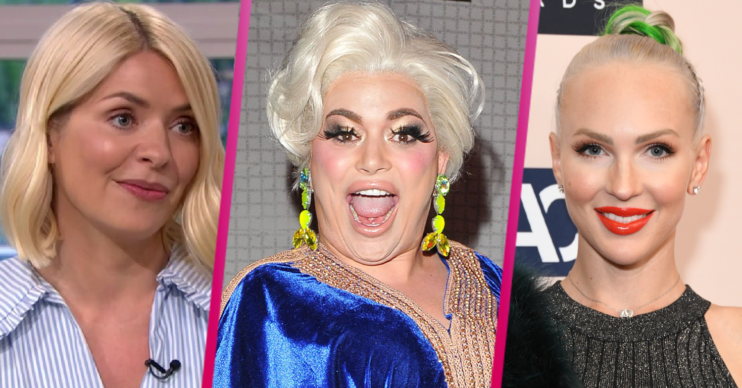 Strictly Come Dancing 2021 rumours are hotting up, not least because pro dancer Janette Manrara quit the Saturday show to concentrate on co-presenting It Takes Two.

And now, because Strictly Come Dancing is back in the forefront of our minds, we need to know who will be foxtrotting this year.

So who are the latest rumoured stars to be taking part? Here’s everything you need to know…

Strictly Come Dancing 2021: Who is going to be on this year?

The latest name in the frame is celebrity drag artist Baga Chipz, aka Leo Loren.

Strictly producers always try to do things a little bit differently, so they want to introduce a drag artist to shake up perceptions even further.

They said: “There’s been a real shift in thinking on this in recent years, with contests having same sex partners appearing more and more.

“But Strictly producers always try to do things a little bit differently, so they want to introduce a drag artist to shake up perceptions even further.

“It could mean that the drag artist in question performs dressed as a man or dressed as a woman – and that’s before considering whether they’re paired up with a male or female pro. There are endless possibilities, all of them exciting.”

She recently gave birth to her first child, baby Christian, and it seems the Selling Sunset star has another first on her list – appearing on Strictly!

Christine fuelled rumours that she’s signed up to appear after posting a mysterious tweet over the weekend.

She said: “PASSPORT IN HAND! I’m so excited to announce I will be coming to the UK in September for a big surprise!

“I can’t wait to share more soon, but I look forward to finally meeting you guys!”

Of course, as any Strictly fan will know, the series kicks off in September…

BBC Breakfast presenter Louise sensationally quit the show after 20 years, and immediately rumours started around her involvement with this year’s Strictly.

Not least because of co-host Dan Walker.

He straight-out asked her about appearing on the show, to which Louise coyly replied: “You know the answer to that, I’m on a lifetime ban!”

That led many to wonder whether he could now fit Strictly into his schedule.

A Strictly insider told The Sun: “Crucially he now has a clear diary on Saturdays. He is one of our top targets for this year’s cast.”

As for Dan himself, he said in 2020: “There’s a regular phone call that comes in.

Previously unknown 23-year-old Brummie actor Gregory shot to fame thanks to his portrayal of bent copper Ryan Pilkington in Line of Duty.

But it’s not just Gregory from the smash-hit crime drama that the BBC has its eyes on.

Vicky McClure (who plays Kate Fleming) and newcomer Shalom Brun-Frankling (who played Chloe in series six) are also rumoured to be waltzing onto the dance floor.

Once again, The Sun quoted a source, who said: “Line Of Duty is the biggest show on telly by miles so Strictly producers would love to secure one of its stars to take part.”

GMB weatherman Alex, 40, did not dispel rumours of a Strictly appearance when The Sun speculated.

In fact, he said on Twitter: “Do I need to brush up on my 2 step and shuffle?”

Another GMB weather person the BBC is rumoured to have its eye on is Laura Tobin.

Could either of these two carry on the tradition of GMB hosts appearing on Strictly?

The former Liverpool, Newcastle, Real Madrid and England footie star has always refused Strictly in the past.

But now, according to reports, he’s set to accept the show’s offer.

A source told The Sun: “Michael has been on our wish list for a while. He would be a great signing for us.”

A self-confessed Strictly fan, Holly would be an A-list signing for the show.

However, it’s unlikely because of her ties to ITV and the channel’s rival, Dancing On Ice.

One person who would love to see her there is Strictly pro dancer, Giovani Pernice.

The Italian recently told The Sun: “We would have so much fun and she would do amazing.”

Fashion guru and now cooking star Gok is reportedly involved in a head-to-head war between Strictly and I’m A Celebrity for his reality services.

Gok said recently: “I have been asked to do both and, quite often, I’ll see whether I would do it or not.

“Believe it or not, I just don’t have the confidence to do it.

“I know that I would be terrified before I went onto the dance floor and I just don’t think I’ve got it in me.”

The former Corrie star is currently out of work, and has recently completed 10 marathons on 10 days for charity.

The Sun says Ryan turned down Strictly last year because he and fiancé Lucy Mecklenburgh had just welcomed their first child.

But now bosses are keen on him for this year.

“Bosses think he’d be really good on the show. Everyone knows and loves him from Corrie and his ITV show,” a source said.

Are you looking forward to Strictly Come Dancing 2021? Leave us a comment on our Facebook page @EntertainmentDailyFix and let us know!