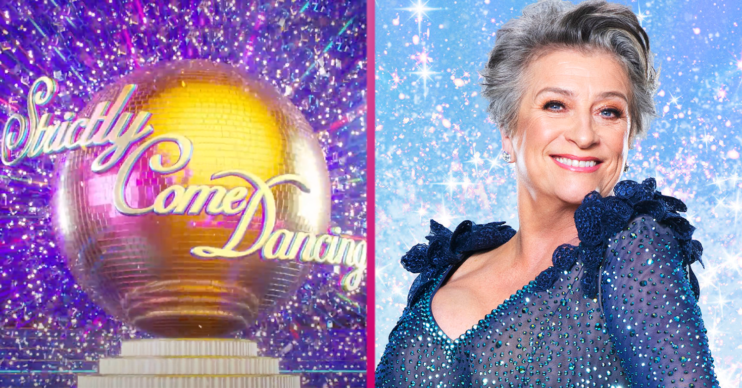 She also gets first-night nerves and thinks she may be sick!

Strictly newcomer Caroline Quentin has revealed she might “cry” if she receives any negative criticism from the show’s judges.

She has also predicted she’ll “fall over” when she takes on some of the more complex dances.

And she’s so worried about experiencing stage fright, which has made her feel shaky and nauseous when she’s taken to the stage in the past.

With the new series of Strictly due to launch on October 17 on BBC One, the cast of 2020 sat down with Entertainment Daily and a host of other news outlets to talk about the new series.

How does Caroline Quentin feel about the Strictly judges?

And Caroline appears more than a little worried about how she’ll react in front of Craig Revel Horwood and his fellow judges.

She revealed she is going to “hate” the criticism from Craig, Shirley Ballas and Motsi Mabuse.

“I hate criticism and I’m not going to like that at all,” she said.

“I don’t know how I’m going to react. I’ll either fight back, run away or cry, I don’t know what.”

Caroline added: “It must be so difficult when you’ve turned yourself inside out, been thrown around and bumped your knee and suddenly someone says: ‘Well, that wasn’t very good, was it?’

“Who’s not going to react?” she added.

Read more: Strictly Neil Jones won’t be partnered with a celebrity this year

She also predicted she’ll fall over and isn’t looking forward to the ballroom aspect of the show.

“I’m slightly trepidatious about those ones with the fiddly feet,” she said. “I’m going to fall over.”

When it comes to how far she wants to go in the competition, Caroline’s in it to win it.

“I just want to win. I’ve just got as far as winning and that’s as far as I’ve got,” she laughed.

“I’m joking, I’ll just enjoy myself and when they get sick of me they’ll throw me away and that’s fine too, that’s showbiz.”

Is she ready for the risqué outfits?

Something else that’s showbiz – and comes hand in hand with appearing on Strictly – are the show’s sometimes risqué outfits.

Is Caroline, who turned 60 in June, worried about the skimpy sequinned dresses?

“I’m going to hand over to the experts and just let them do their thing,” she said.

“And, unless I’m actually scared something is going to fall out in the live show, I’m not going to moan about it. But if I think something might be a bit perilous then I might say something,” she quipped.

She is worried, though, about first-night nerves.

The stage veteran revealed: “I’m feeling quite trepidatious about the live show, I can’t pretend I’m not.

“I do suffer from first-night nerves when I’m in plays. It always takes me quite a long time to get rid of the shakes and I can get quite nauseous.

“They said that might be a hurdle I’ll have to overcome but I’ll give it my best shot. I’m going to do whatever I can do to stay in and learn,” she said.

When it comes to supporters, Caroline has no end of famous friends waiting in the wings to wish her well.

I do suffer from first-night nerves when I’m in plays. It always takes me quite a long time to get rid of the shakes and I can get quite nauseous.

Amanda Holden and Martin Clunes have already said they think she’ll be brilliant.

“Martin Clunes apparently, I hear he thinks I’m in it to win it,” Caroline revealed.

“To be honest, most of what I’ve had is really sweet messages. In a gloomy time, people said: ‘Go and have a laugh, go and enjoy it for us,’ because it has been bleak.”

Caroline also revealed support from another rather unlikely source – Elizabeth and Damian Hurley.

The pair are apparently die-hard Strictly fans and have offered Caroline their words of wisdom, gathered from their years of watching the show.

“Honestly, I revealed on The One Show I was taking part and I was shooting with Elizabeth Hurley and her boy Damian at the time. They are just authorities on it and gave me tips.

“Liz said: ‘Darling, what you mustn’t do is, keep your powder dry, don’t blow everything in one go. Try really hard but don’t give too much away.’

“She was just adorable. She was great and she loves it.”

So will we be seeing Elizabeth in the audience cheering Caroline on, should a live audience be allowed?

Asked why she decided to take part in the show, Caroline revealed she wants to be an inspiration to older people who watch Strictly.

“It’s been a difficult and dark time for mental health issues for a lot of people and I hope it encourages people of 60 and over to do a bit of dance,” she said.

“Even if it’s just on your own to a bit of music in the sitting room. I just think it’s really good for our spirit and our wellbeing, physically and mentally as well.

“One of the reasons I thought about doing it now is, as we get older, we should be taxing ourselves, learning something new.”

As an older contestant, Caroline said it’s essential that whoever she’s paired with is “patient”.

She revealed: “I don’t think they need to be too strict, but they have to be patient and have to have a sense of humour.

“I hope they remember when you’re a little bit older your brain doesn’t work quite as quickly and your body takes longer to get muscle memory.”

Support from her family

And, while she admits she will miss her family as she forms a support bubble with her pro, her family are rooting for her.

Caroline is married to husband Sam Farmer. They’re parents to Emily and William.

“All of his mates really follow Strictly Come Dancing. It’s so sweet and so supportive. They say: ‘Mrs Farmer, we’re really excited about watching you go on Strictly.’ It’s just really nice.”

Head to our Facebook page @EntertainmentDailyFix and tell us if you’re backing Caroline to win.