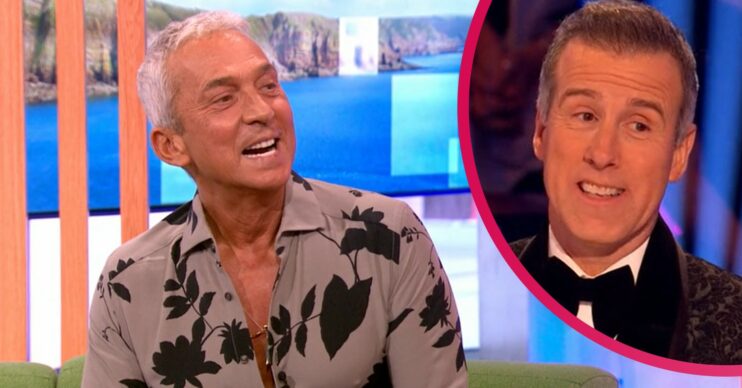 Anton Du Beke will be replacing Bruno again this year

Strictly Come Dancing star Bruno Tonioli has revealed the real reason he won’t be a judge on the 2022 series.

Bruno, who has appeared on 18 series of the show, spoke about his decision not to return during an appearance on The One Show last night.

The Italian dancer explained to hosts Michelle Ackerley and Ronan Keating: “Over Covid, the travelling situation really is so unpredictable.

“It created a situation that wasn’t sustainable. I miss it so much.”

When asked whether he’s returning to Strictly this year, Bruno said: “Unfortunately, Dancing with the Stars has moved onto Disney plus.

“It’s a big deal, it’s very very exciting. Because of the travel situation I can’t guarantee that I’m going to be there.

“Two years ago, I changed my tickets every week. They need continuity. It’s my decision.

“And I think Anton has done a fantastic job, he deserves to be on that seat.”

Bruno then addressed the camera and delivered a message to Anton.

He said: “Anton, you have done a fantastic job, you deserve it, it’s a 10 from me,” as he held up the number 10 Strictly paddle.

Bruno continued: “Carry on, do me proud but you’ve already done it anyway.”

He then went on to deliver messages to the fellow judges.

However, Bruno said he’s “not gone forever” and he may do the Strictly tours.

He said: “Never count me out. Never say never. I’ll always be part of the family, I was there from the beginning.

He then turned to Ronan and joked: “We could do a duet!”

Bruno went on to praise the judging panel and said it worked well last year.

He added: “I think it’s going to be fantastic and they have all my support. But I miss the audience more than ever so hopefully we’ll do something else.”

Meanwhile, Anton has said in a statement: “Everyone knows how much I absolutely love the show and I’m utterly delighted to be continuing as a regular judge.”

Will you miss Bruno on Strictly? Leave us a comment on our Facebook page @EntertainmentDailyFix and let us know.